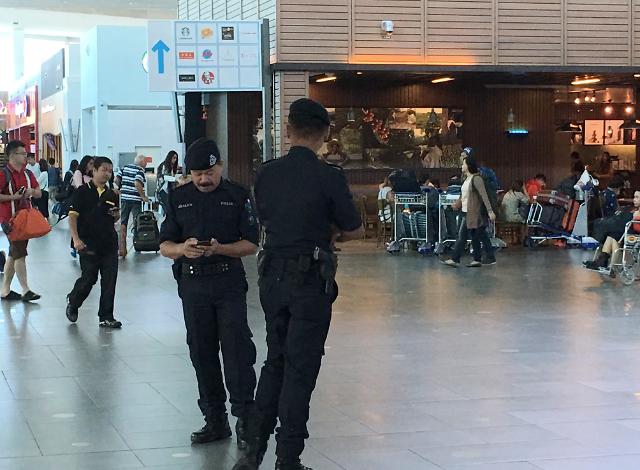 Malaysian police are on patrol at an airport in Kuala Lumpur.[AP/Yonhap News Photo]

​
A second female suspect carrying an Indonesian passport was arrested in Malaysia in a manhunt for those involved in a plot to kill the stepbrother of North Korean leader Kim Jong-un at an airport ticket booth.

The second suspect identified by her Indonesian passport as Siti Aishah, 25, was also "positively identified" from the airport's CCTV footage, a Malaysian police statement said, adding she was alone at the time of arrest.

News reports in Kuala Lumpur suggested that four men and two women were involved in the suspected assassination of Kim Jong-nam who was attacked Monday while waiting for a flight to Macau at the customer service counter of the Kuala Lumpur airport.

The first suspect traveling with Vietnamese travel documents under the name Doan Thi Huong was caught roaming the annex of the airport on Wednesday. She reportedly told investigators that she was the only one left behind at the hotel while other suspects fled.

A captured CCTV image showed the first woman carrying a sling handbag and wearing a top with the word "LOL" (Laughing Out Loud) in large letters printed on it and a blue skirt as she was waiting for a taxi at the exit.