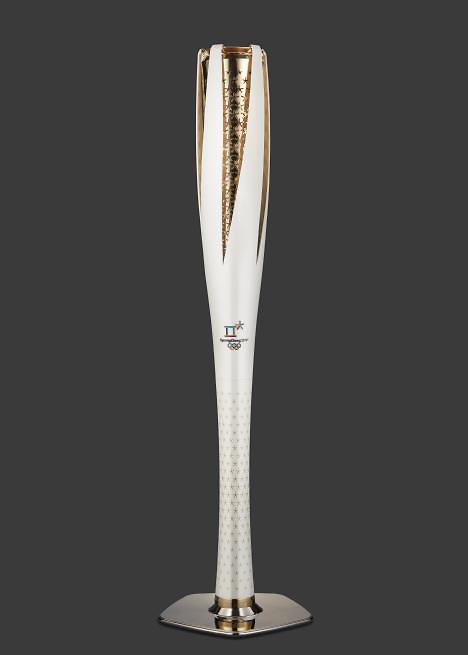 
The organizers of the 2018 PyeongChang Winter Olympics on Thursday unveiled the torch inspired by traditional Korean white porcelain.

The PyeongChang Organizing Committee for the 2018 Olympic & Paralympic Winter Games (POCOG) unveiled the torch at a press conference before celebrations of the one-year countdown to the competition.

The POCOG said the torch was designed to keep the flame alive in the high altitudes of PyeongChang, some 180 kilometers east of Seoul in Gangwon Province, and in blustery winter conditions in the region. When wind blows toward the flame, an air tunnel is created to provide more oxygen, which will help keep the flame lit throughout the torch relay. A pentagon-shaped hole in the bottom of the torch will help drain water out the bottom of the torch in rainy conditions.

The color white drew its cues from white porcelain, and also from snow and ice, two major symbols of the Winter Olympics. The torch is 700 millimeters tall, representing the altitude of PyeongChang, which sits 700 meters above sea level.

According to the POCOG, the five-angled shape in the middle of the torch's cap represents "the spirit of sports, which connects races, nations, religions, genders, cultures and the five continents around the world, uniting them with passion."

The torch was designed by South Korean artist Kim Young-se, and was manufactured by Hanwha Corp., which also made the torch for the 1988 Seoul Summer Olympics.