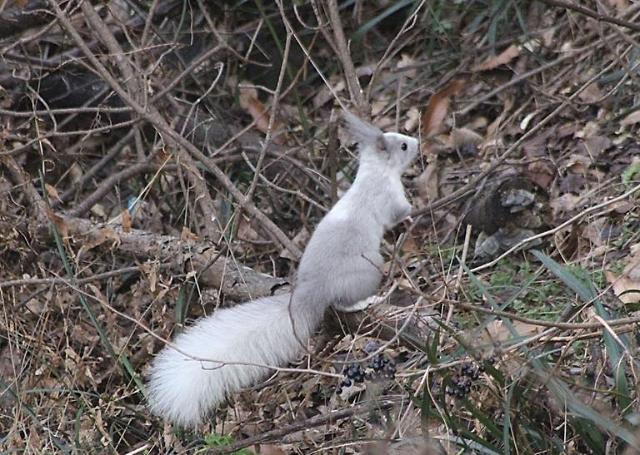 
A rare white native squirrel with black eyes has been found in the South Korean wild, prompting its founder to believe that it is a favorable omen.

Pictures taken by Han Jong-hwan, 64, showed a Sciurus Vulgaris Coreae, a subspecies of the Eurasian red squirrel. The squirrel's color is usually gunmetal, but Han saw a white one on December 24 during his walk in a park in the southeastern ancient city of Gyeongju.

Traditionally, Koreans regard white animals as auspicious. White squirrels have been found in Asia, but the white variant of Sciurus Vulgaris Coreae is quite rare.

"I spotted it among a family of squirrels while I was following a trail. Its white coat was conspicuous," he said. "I've never seen or heard about a white squirrel. I think something good will be brought to me this year."

Albinism is a congenital disorder characterized by little or no production of melanin. This lack of melanin makes the albino animal's eyes appear pink or red.

However, squirrels with white coats and dark eyes are likely leucistic. Leucism involves a partial loss of pigmentation and it's often mistaken for albinism, but while leucistic animals have white, pale or patchy coloration, their eye color is unaffected.