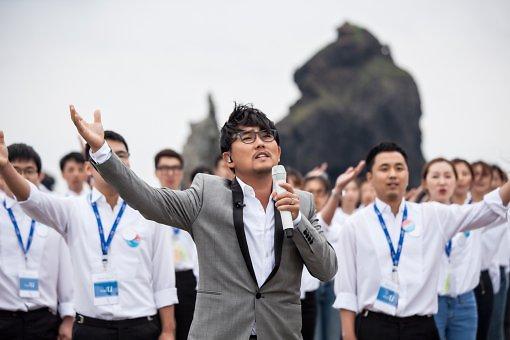 This project was inspired by one courageous man, named Yoon Il-kon, who envisioned a united Korea. Yoon is a North Korean native who was one of the few North Koreans to have a relatively comfortable life in the North.

Despite his “fortune,” he decided to leave everything behind, and risked his life to escape to South Korea where there would be more opportunities and resources to fulfill his vision.

His journey to his promise land was not easy. He lived in complete poverty, destitute of basic necessities, which eventually drove him to the brink of suicide.

One day, he met Jesus Christ and converted to Christianity. His new faith restored hope in his vision and he found the strength to finish his journey to South Korea.

However, life in the South wasn’t easy either. Defectors such as himself are ridiculed and looked down upon. They have to go to great lengths to try to disguise their identities, such as lying that their thick North Korean accents are from the South Korean countryside.

Yoon knew that to have his voice be heard, he needed the help of someone influential like K-pop legend Lee.

Lee and Yoon met last March, where Yoon told the singer his story, and a united Korea he envisioned and proceeded to ask for the singer’s help.

Lee realized the best way to help would be through the power of music and wrote a unification song, titled “The Day,” to be performed with With-U.

With-U is a choir comprised of 55 men and women aged between 20 and 30, who are all North Korean defectors like Yoon. The stories of the members of the North Korean choir are currently being documented and will be broadcasted on TV.

Inspired by Yoon and With-U, Lee took the idea one step further and started the One Nation (ON) campaign.

Spanish painter Eva Airmisen designed the logo and design for the ON campaign.

Lee said that it was his dream to lead this group of young men and women and perform at instrumental institutions like the United Nations or Harvard University to help raise awareness.

His dream has now finally become a reality. Lee will be performing at Harvard University on Aug. 29 along With-U.

Lee states: “I believe in hope and that hope can be conveyed through music, even in the most desperate times. Because music is universal and transcends cultural boundaries, it has a special way of bringing people together. That’s what inspired me to start this unification campaign.”

Lee conducted With-U on Aug. 14 and performed his song “The Day” along with “Arirang” on Dokdo.

Dokdo, otherwise known as the Liancourt Rocks, has been the area of great controversy between Japan and Korea. The fight for Dokdo has been going on for decades.

The two Koreas have built a united front to defend Dokdo as inherently Korean land.
Performing at Dokdo turned out as the ultimate symbolic gesture of unification that defines the ON campaign and what Yoon first envisioned.

The making of “The Day” was a collaborative effort with arranger and producer Yang Bang-eun; the Korean Symphony Orchestra; and Grammy award-winning mix engineer Steve Hodge.

“The Day” will be released in three versions - Lee Seung-chul’s solo version in Korean, a Lee Seung-chul and With-U choir version, and an English version - in August.