A South Korean Man Found Dead Nailed to a Cross 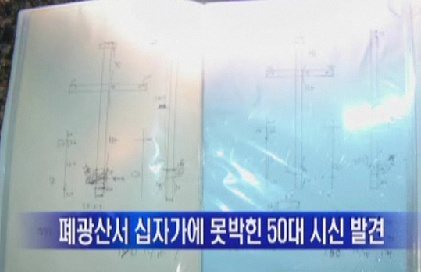 A week after Easter Sunday, a man was found dead nailed to a wooden cross just like Jesus Christ was crucified.

A South Korean man found dead nailed to a wooden cross -- nails pierced on his hands and feet, a thorn crown on his head, wearing a pair of white undershorts, and approximately 10cm deep stabbed wound on the left side of his stomach.

According to the police, the body of a 58- year old man identified only as Kim was found on Sunday in an abandoned rock quarry in the central city of Mungyeong.

Investigators said Kim is a Christian and used to be a pastor decades ago; he was also known as a fanatical religious person.

The police and the investigators assumed this case as a homicide at first, however, after discovering notes on how to build the wooden cross with measurements, the order of the plan such as drilling nails on hands and feet and etc; investigators said Kim’s daughter confirmed Kim’s handwriting.

While this case has left everyone in South Korea in a horror and shock, the police and the investigators are still on a mission to find the answer: Homicide or suicide?