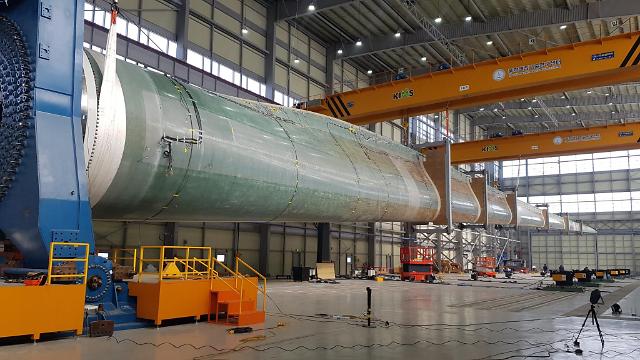 [Courtesy of the Korea Institute of Materials Science]

SEOUL -- A state-run research body in South Korea has achieved an important turning point for the commercial production of a giant wind power blade stretching 100 meters or longer. Large and high-speed blades for huge wind turbines are important for the efficient utilization of wind energy.

The Korea Institute of Materials Science (KIMS) said it has succeeded in the certification test of a 100m-class wind power blade for the third time in the world. The institute would seek to acquire domestic and international certification after completing fatigue load and other tests. Giant blades will be used in offshore wind farm complexes to be built off the southwestern coast.

"The successful development of 100m blades for ultra-large offshore wind turbines means that domestic offshore wind technology will leap significantly to reach the world's best," Park Ji-sang, a KIMS researcher in charge of wind power technology, said in a statement on December 1. "We will step up efforts to create a bridgehead for domestic wind turbines to enter overseas markets."

There are only three countries in the world that have facilities and test technology for the certification test of giant wind blades which are longer than 100m -- KIMS, ORE Catapult of Britain, and China General Certification (CGC).

KIMS has led a government project to develop a blade with a capacity of eight megawatts and a length of 100m. The turbine system was manufactured by Doosan Heavy Industries & Construction. KIMS and Doosan Heavy were responsible for blade design, while Human Composites was in charge of production.

In an effort to reduce the use of fossil fuel and nuclear power for electricity generation, South Korea is gradually switching to renewable energy sources. The Seoul government has endorsed a number of projects to build clean energy facilities, including solar power plants and wind farms, onshore and offshore.