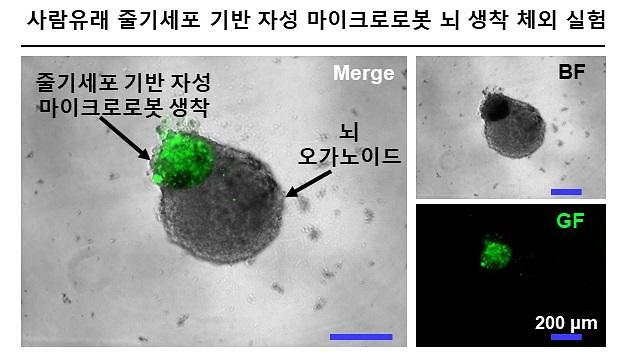 
SEOUL -- Researchers have developed a stem cell-based microrobot called "cellbot" capable of delivering stem cells to the brain via intranasal passage using a minimally invasive method. The cellbot has the potential to become a key player in the treatment of neurological disorders such as brain cancer, Parkinson's disease and Alzheimer's disease.

Stem cells are special human cells that can develop into many different cell types. In stem cell transplant therapy, stem cells are used to replace cells damaged by chemotherapy or diseases. However, the special cells need to be applied directly to the damaged area or to the closest region to maximize the efficacy of therapy.

The Daegu Gyeongbuk Institute of Science and Technology (DGIST) said in a statement on November 2 that its research team has developed a cellbot for the minimally invasive targeted delivery of stem cells to the brain. The cellbot was created by internalizing superparamagnetic iron oxide nanoparticles into human turbinate stem cells. "This approach has the potential to effectively treat central nervous system disorders in a minimally invasive manner," the institute said.

Researchers said the cellbot can be remotely controlled to quickly move to a targeted area. Through tests, they were able to engraft cellbots onto the cerebral cortex of a rat.

"We have suggested a new approach to the treatment of Alzheimer's disease, Parkinson's disease and brain cancer by developing a magnetically powered stem cell-based microrobot that delivers stem cells via the intranasal pathway," DGIST head researcher Choi Hong-soo was quoted as saying. The research was published through the website of Advanced Healthcare Materials, an international scientific journal.