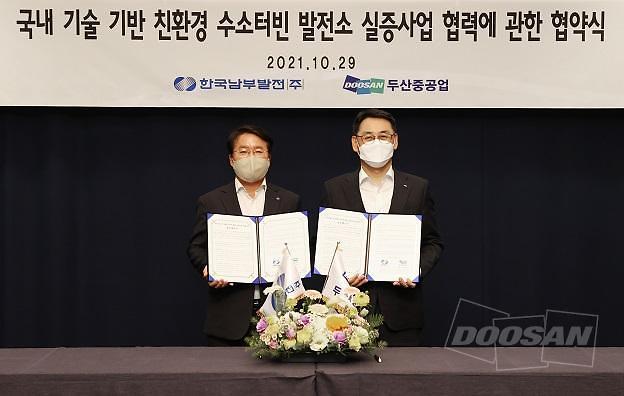 
SEOUL -- Doosan Heavy Industries & Construction, a key player in South Korea's power industry, will work with a public power company to demonstrate a gas turbine powered by green hydrogen. Unlike blue hydrogen produced by applying carbon capture and storage to reduce CO2 emissions, green hydrogen can be produced through electrolysis, a process of passing an electrical current through an electrolyzer to split water and release only hydrogen and oxygen.

Gas turbines have become one of the most widely-used power generating technologies because they reduce the emission of fine dust and other air pollutants. South Korea has presented a goal to commercialize a 300MW homemade hydrogen gas turbine by 2040. As a bridge power in energy conversion, a standard model of LNG turbines will be developed.

Doosan Heavy is responsible for developing a hydrogen gas turbine and its burner, while Korea Southern Power will convert a gas turbine in operation at its combined cycle power plant into a hydrogen turbine. "Applying a hydrogen power turbine using green hydrogen to a power plant can contribute not only to carbon neutrality but also to revitalizing the hydrogen economy," Doosan Heavy president Jung Yeon-in said in a statement on October 29.

Policymakers have described independence in gas turbine technology as an important task in terms of energy security. A task force involving private companies, state bodies and research institutes has been launched to push for the early commercialization of gas turbine power generation. Doosan Heavy has joined a project to demonstrate mixed hydrogen combustion technologies that burn natural gas together with hydrogen in the southeastern industrial city of Ulsan.