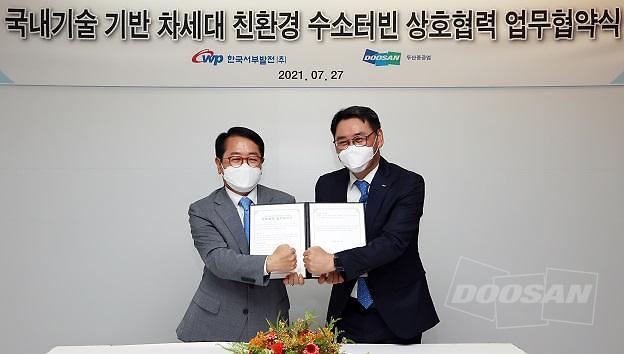 SEOUL -- Doosan Heavy Industries & Construction, a key player in South Korea's power industry, tied up with a public power supplier to develop an eco-friendly hydrogen gas turbine and its burner. The partnership underlines South Korea's efforts to achieve the early development and commercialization of a commercially viable gas turbine powered by hydrogen.

Gas turbines have become one of the most widely-used power generating technologies because they reduce the emission of fine dust and other air pollutants. South Korea has presented a goal to commercialize a 300MW homemade hydrogen gas turbine by 2040. As a bridge power in energy conversion, a standard model of LNG turbines will be developed.

"We will also make company-wide efforts to develop an eco-friendly hydrogen turbine for carbon neutrality," Doosan Heavy president Jung Yeon-in said in a statement on July 27, citing the company's know-how in the development of gas turbines. In September 2019, the company unveiled DGT6-300H S1, a gas-fueled power gas turbine model that would be supplied to a 500MW cogeneration power plant in Gimpo west of Seoul for commercial operations in 2023.

A task force involving private companies, state bodies and research institutes has been launched to push for the early commercialization of gas turbine power generation, based on a prototype developed by Doosan Heavy. In June, Doosan Heavy joined a project to demonstrate mixed hydrogen combustion technologies that burn natural gas together with hydrogen in the southeastern industrial city of Ulsan.

Policymakers have described independence in gas turbine technology as an important task in terms of energy security. All 149 gas turbines operating at power plants in South Korea are from overseas companies.