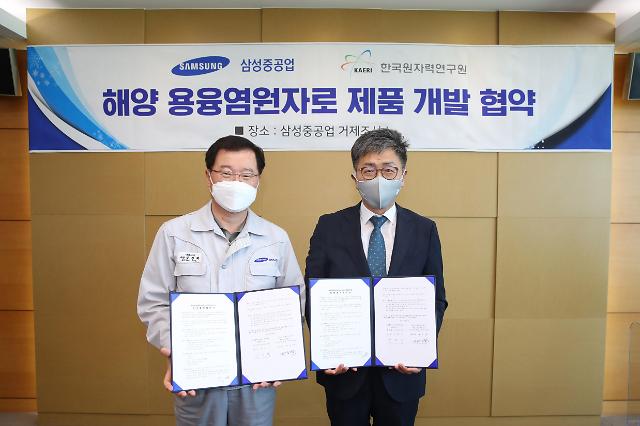 
SEOUL -- South Korea's state nuclear research body joined hands with a major domestic shipbuilder to develop a small carbon-free fission reactor based on molten salt that would be used for ships and floating nuclear power plants.

Samsung Heavy Industries (SHI) and the Korea Atomic Energy Research Institute (KAERI) have signed a joint research agreement on June 9 to push for the development of a molten salt reactor (MSR) that could produce electricity and hydrogen at the same time. "The marine transport ship based on this will be a game-changer in international logistics," KAERI President Park Won-seok said in a statement on June 9.

MSRs are a class of small modular reactors (SMRs) that have been studied to address the limitations of traditional light-water reactors. MSRs can reduce expensive containment structures and eliminate hydrogen as a source of explosion risk and do not produce dangerous and radioactive fission gases that are under pressure.

SHI said it would pioneer markets for floating nuclear power plants and ships based on MSRs. SHI and KAERI would conduct a joint study on performance verification and the evaluation of economic feasibility.

"As a carbon-free energy source that can respond efficiently to climate change, MSR is the next-generation technology that corresponds to SHI's vision," SHI CEO Jung Jin-taek said, describing MSRs as SHI's new future growth engine along with ammonia and hydrogen technologies which are under development.