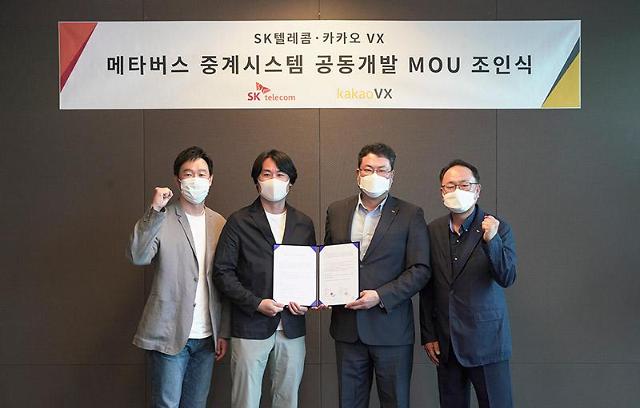 
SEOUL -- For the first time in South Korea, artificial intelligence and 3D graphics will be utilized to apply a metaverse solution to the TV broadcasting of golf competitions to increase the level of realism and immersion, through cooperation between SK Telecom and Kakao VX, the provider of an integrated golf service that combines sports and information technology.

Metaverse broadcasting will be introduced at the SK Telecom Open, a professional golf tournament sponsored by SK Telecom (SKT) at Pinx Golf Club on the southern resort island of Jeju that begins on June 10. Metaverse broadcasting will be adopted in three holes -- 7th, 13th and 18th -- by using radar technology to show shot trajectories realistically in a virtual space.

The metaverse is a collective virtual shared space, created by the convergence of virtually enhanced physical reality and physically persistent virtual space. It describes a future internet of persistent, shared, 3D virtual spaces linked into a perceived virtual universe.

SKT's various data for each player will be combined with Kakao VX's 3D map to show various data such as ball drop points, ball trajectories, distance, and a shot distribution chart in a virtual 3D course. "Various exchanges are possible between sports players and fans," SKT's media business support division head Lee Jae-kwang said in a statement on May 20.

SKT has led the expansion of metaverse in South Korea by establishing a mixed reality (MR) studio. MR is a hybrid of virtual reality and augmented reality. An MR headset projects 3D holographic images in real-time to maximize the viewing experience of users. The studio uses 106 cameras to shoot 360 degrees and up to 60 frames per second and automatically compresses high-capacity video data into mobile streaming capacity.