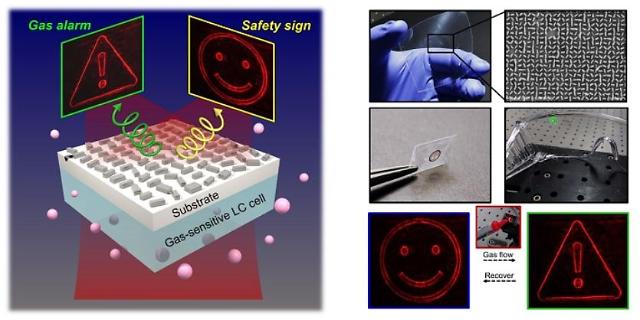 
SEOUL -- Researchers have developed a tiny wearable metasurface sensor capable of detecting harmful gases and biochemical substances in real-time. The sensor can be utilized in medical, military, industrial, and environmental sectors. Because it is tiny and flexible, the sensor can adhere to safety goggles.

Detecting biological and chemical substances in real-time is vital for the safety of people in every environment. It is particularly important for public health and emergency workers. However, real-time sensors that consist of complex electronic parts are expensive and bulky.

Pohang University of Science and Technology (POSTECH) said in a statement on April 9 that its research team has developed a wearable sensor that uses a holographic metasurface to instantly alert wearers when it detects harmful substances.

An electronic metasurface is an artificial composite that gains electrical properties from its structure. When there are dangerous chemicals nearby, the sensor's metasurface will change its molecular structure to display holographic messages in just a few seconds.

Researchers have tested the sensor using isopropyl alcohol, which is very hazardous, and found that it is capable of detecting very small amounts of harmful substances. The sensor detected volatile solvent from a board marker.

The research team would upgrade its technology to create more sensitive sensors. "The newly developed micro-sized wearable gas sensor provides visual alarms that are more intuitive than other alarms such as sounds and light," POSTECH Professor Rho Jun-suk was quoted as saying.