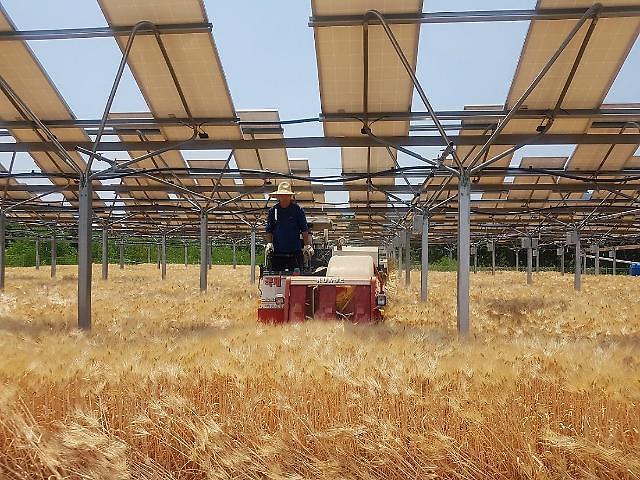 
SEOUL -- A consortium involving Hanwha Q Cells, a major photovoltaic manufacturer in South Korea, will participate in a state project to develop a solar power system that would be used to grow crops and generate electricity simultaneously without losses in crop yields and energy production.

The project was sponsored by the Korea Institute of Planning and Evaluation for Technology in Food, Agriculture and Forestry (IPET), a state research body, to establish standards for a hybrid system for solar energy and farming. It is aimed at preserving the amount of photosynthesis needed for crops to grow and use the rest for solar power.

The development of a solar power system will be supervised by a Yeungnam University research team. Moden Solar, a solar panel consulting firm, will design an optimal basic structure.

Solar power requires large photovoltaic panel modules set up at an optimal angle to maximize their exposure to light. Modules are built about one or two meters off the ground, making the ground beneath them almost useless. Researchers have demonstrated methods to grow rice and ensure the free movement of agricultural machines under solar panels.

In their joint research that began in 2017, Korea South-East Power, a power supplier, and the Gyueongnam National University of Science and Technology tested a hybrid system for farming and solar power and detected no residual pesticide in the rice produced or heavy metals in the soil. Researchers used a water circulation system and a LED lighting system for high crop yields.