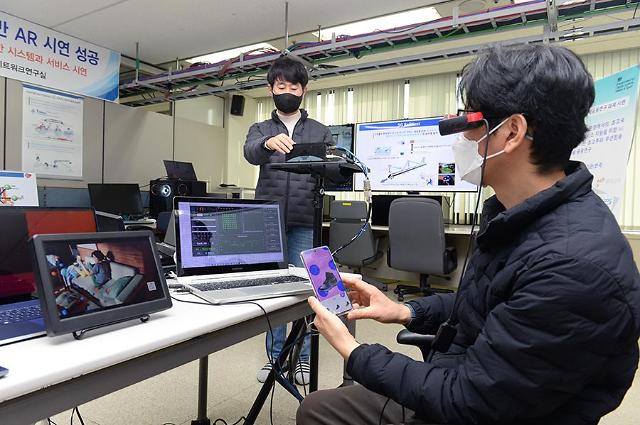 SEOUL -- British and South Korean researchers achieved a notable technology breakthrough in mobile telecommunications through the joint demonstration of a seamless 5G-based augmented reality service on a crowded subway route in Seoul utilizing new technologies that would enable various multimedia services such as high-definition video streaming in running buses and subways.

The demonstration was made in late February in a subway section between Jamsil and Songpa in southeastern Seoul, according to the Electronics and Telecommunications Research Institute (ETRI). A similar demonstration will be given in Britain in April, the state institute said, adding that researchers would conduct additional research to apply high-speed wireless network technology in subways and various railway environments.

"Through this demonstration, we are able to provide high-speed wireless LAN services on commercial public transportation networks such as subways," ETRI president Kim Myung-joon said in a statement on March 10. "It is significant in terms of providing opportunities for domestic companies to enter overseas markets in the future based on this technology." A wireless LAN links two or more devices using wireless communication to form a local area network within a limited area.

The demonstration was the result of joint research for two years that followed an ICT policy forum in 2018 between the Ministry of Science and ICT and the Department for Digital, Culture, Media and Sport.

The maximum speed of 1.9 gigabits per second (Gbps) between a base station system and a terminal system was recorded, with 190 people enjoying the service at the same time, ETRI said. Gbps is a data transfer speed measurement for high-speed networks. The current average download speed of long-term evolution (LTE) wireless LAN services provided by mobile carriers on the subway is 58.5 Mbps. The speed gets even lower at rush hour.

For smooth multimedia services, researchers applied a wireless backhaul solution in super-high frequency bands by utilizing millimeter-wave frequencies. Extremely high frequency is for the band of radio frequencies in the electromagnetic spectrum. Radiation in this band is called millimeter waves. Certain frequency ranges near the bottom of the band are being used in the new generation of mobile phone networks.

Wireless backhaul is the use of wireless communications systems to get data from an end-user to a node in a major network. The term can also refer to the transmission of network data over an alternative wireless route when the normal route is unavailable or overtaxed. The most common method of wireless backhaul involves microwave systems. 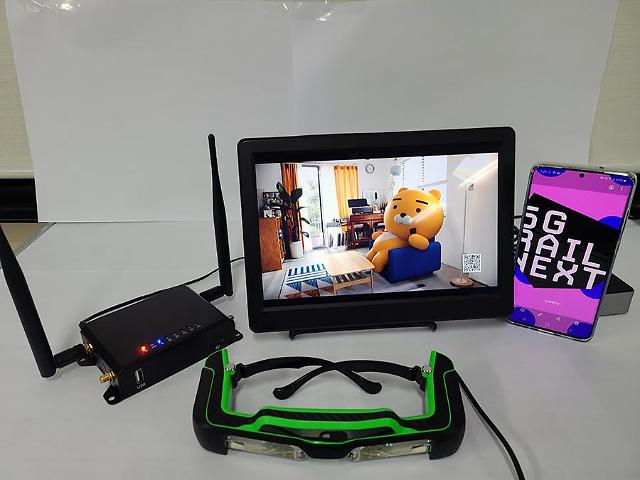 Researchers created a demonstration environment by establishing a base station system in five sections inside a subway tunnel and a terminal system in the driver's room. The demonstration site, known for its curvature, was selected to see if the test service performs sufficiently beyond the limit of frequency characteristics with strong straightness.

The transmission speed was measured in a running subway. An immersive multimedia service was tested at a subway station after an advertising service model was applied so that users can receive customized content and wear shoes with AR technology. With a signage monitor advertising sneakers, smartphone apps and AR glasses were connected.

The test used beam-forming technology and handover technology. Beam-forming is possible between equipment made by different companies and focuses power to desired users to form beams, expand coverage and increase speed. Handover refers to the process of transferring an ongoing call or data session from one channel connected to the core network to another channel. ETRI said handover technology maintained a natural connection without losing data even when base stations connecting terminals changed.