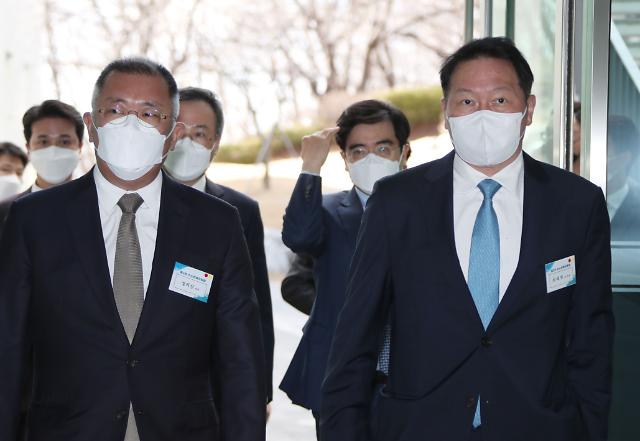 
SEOUL -- South Korea's Hyundai auto group forged a hydrogen alliance with SK Group and agreed to push for a CEO consultative body for cooperation in the establishment of a hydrogen ecosystem together with POSCO. The alliance came on the sidelines of a hydrogen conference chaired by Prime Minister Chung Sye-kyun in the western port city of Incheon on March 2.

Hyundai auto group chairman Chung Eui-sun said hydrogen would serve as an "energy currency" in the carbon-neutral era. "Through cooperation with SK Group, we will establish a sound hydrogen ecosystem in which hydrogen is produced, distributed, and utilized organically, and advance the realization of a hydrogen society through successful energy conversion."

Chung and SK Group chairman Chey Tae-won agreed to push for the establishment of a K-hydrogen council that will serve as a CEO consultative body in the first half of 2021, together with South Korea's POSCO steel group, which forged a similar alliance with Hyundai in February to cooperate in hydrogen vehicles and power generation as well as the development of related technologies. POSCO has already presented a business goal to nurture green hydrogen as one of its new growth engines by completing a five-million-ton green hydrogen production system by 2050.

At the conference in Incheon on March 2, SK said it would invest some 18 trillion won ($16 billion) over five years. "Hydrogen is not affected by the climate and has a small area of land required for production, making it an eco-friendly energy suitable for the domestic environment," Chey said.

SK Group, the country's third-largest conglomerate, has presented a goal to build a plant capable of producing 30,000 tons of liquefied hydrogen per year from 2023. SK E&S, which imports more than three million tons of liquefied natural gas per year, will also produce 250,000 tons of blue hydrogen from 2025. Blue hydrogen is derived from natural gas with carbon capture technology while green hydrogen is produced from water using renewable power.