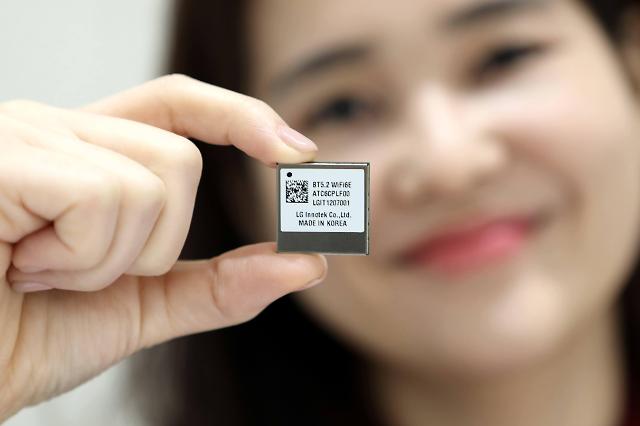 
SEOUL -- LG Innotek has developed a new module applied with next-generation Wi-Fi technology that allows passengers to enjoy movies and games on smartphones by connecting them to car displays, or update software such as navigation conveniently. Through commercialization in 2022, the company aims to pursue global joint marketing with Infineon Technologies AG, a German semiconductor manufacturer that supplies Wi-Fi 6E chips for vehicles.

Wi-Fi 6E identifies Wi-Fi devices that operate at the less congested 6 GHz band to enable high-bandwidth applications that require faster data throughput and lower latency connectivity. With the spread of self-driving technology, competition is growing to develop new Wi-Fi module technology, but it was difficult to apply Wi-Fi 6E due to high density inside cars and structures such as seats.

LG Innotek, the electric component unit of South Korea's LG Group, said it has become "industry-first" to develop a car module using Wi-Fi 6E technology which is a near-field communication component that connects in-vehicle information systems with internal smart devices and external routers. The company pledged active promotion in the global market with its new module to quickly catch up with Japanese rivals.

"As the importance of automotive infotainment in the next-generation mobility era will grow, the Wi-Fi 6E module for vehicles will be able to accelerate the evolution of infotainment," Kim Seong-guk, head of LG Innoteh's car electronic component business, said in a statement on March 2. It is small, slim and compatible with existing modules, requiring no change in existing parts or system design.

Wi-Fi modules that are currently commercialized often slow down or cut off when sending high-definition video. LG Innotek said its new module has no buffering or disconnection even if multiple people connect at the same time. The time required to connect can be reduced because Wi-Fi 6E technology uses 6GHz as well as 2GHz and 5GHz frequency. The expanded bandwidth increases the amount of data and the speed of transmission.

LG Innotek said the new product is durable and maintains its performance despite rapid temperature changes. It was developed to expand the surface area of circuit joints to withstand repeated contraction and expansion.