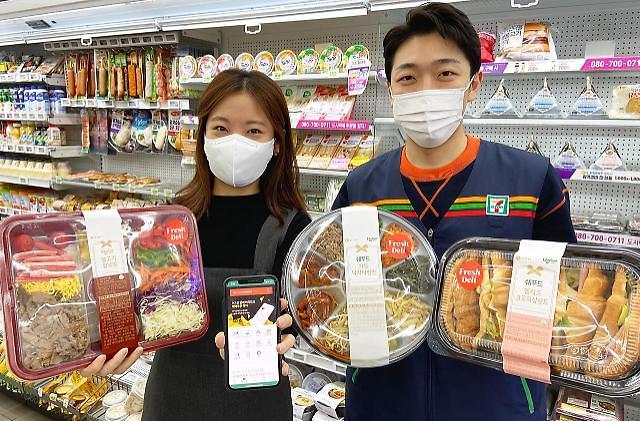 SEOUL -- A lunchbox reservation app service provided by 7-Eleven, a convenience store franchise, garnered popularity among consumers in their 40s. The app helps consumers pick and reserve ready-to-eat lunchbox menus before they are sold out. Customers can pick up reserved menus at nearby stores.

Convenience store lunchbox menus that range from Bibimbap, a traditional Korean rice dish with pre-cooked herbs and meat, to western menus such as salads and clubhouse sandwiches are all-time best-sellers. The convenient meal sets are priced around 6,000 won ($5.4). Cost-effective and convenient lunchbox menus are normally sold out before lunchtime.

Convenience store franchises including 7-Eleven operate dedicated apps that feature reservation services for popular menus including lunchboxes and snacks. Customers can select nearby stores and reserve menus. The apps were designed to be simple so that anyone could use them.

According to data released by 7-Eleven, the number of lunchbox app service reservations made in January and February this year increased by 114.5 percent from the same period last year. Some 38.4 percent of customers in their 40s used the app service. 7-Eleven said that middle-aged customers favored the service because they were not too fussy about the choice of lunch menus. Customers in their 30s stood second with 25.5 percent, followed by those in their 50s with 20.9 percent.

After the COVID-19 pandemic hit South Korea in 2020, many companies advised their workers to avoid crowded restaurants during lunchtimes to prevent infection. The nationwide social distancing campaign brought a change to South Korea's company culture in which workers eat lunch together in groups of three and four. Many workers chose to eat lunchboxes at their office or use delivery services.

Premium lunchboxes made by hotel restaurants and famous chefs were also popular. According to InterContinental Grand Seoul Parnas, a luxury hotel in Seoul's southern office district, sales of premium lunchboxes priced at 30,000 won in March 2020 rose 50 percent from November 2019.