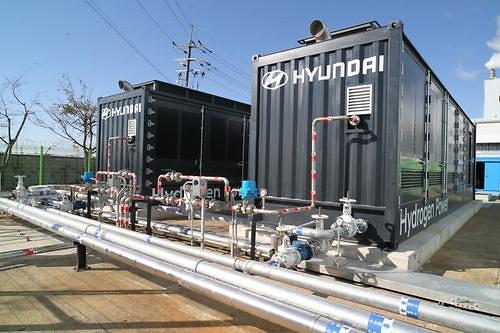 The 1MW facility capable of supplying electricity to about 2,000 households is installed with proton-exchange membrane fuel cells (PEMFCs) that feature lower temperature and pressure ranges as well as a special proton-conducting polymer electrolyte membrane. PEMFCs are built out of membrane electrode assemblies which include the electrodes, electrolyte, catalyst, and gas diffusion layers.

The facility, built on the complex of a power station run by Korea East-West Power Corporation, directly receives hydrogen from hydrogen pipes and reacts with oxygen and ion exchange membrane electrolytes collected from the air. Deokyang has built a 2.8-kilometer-long pipeline to supply byproduct hydrogen from a petrochemical complex.

UIsan is pushing for the establishment of 250MW facilities for hydrogen fuel cell generation by 2030. "Ulsan currently has an industry-wide cycle in the hydrogen mobility sector from hydrogen production, manufacturing related parts, and production of finished vehicles," Mayor Song Chul-ho said in an online ceremony on January 20.

"We will also expand the field of hydrogen fuel cells for power generation to create a hydrogen industry ecosystem," Song said. Ulsan, home to Hyundai Motor and other big manufacturing companies, has led an energy revolution in line with a government campaign to adopt hydrogen fuel cells and electric batteries as a mainstream fuel in the future.

Hyundai has touted hydrogen fuel as an alternative to solve global problems such as pollution and resource depletion. In December 2020, the auto group partnered with LS Electric to develop a fuel cell power generation system that can be used to cope with emergency and peak-time power generation, reduce grid load, and address variability and grid instability in the supply and demand of renewable energy.