Samsung researchers present new method for wider use of holograms 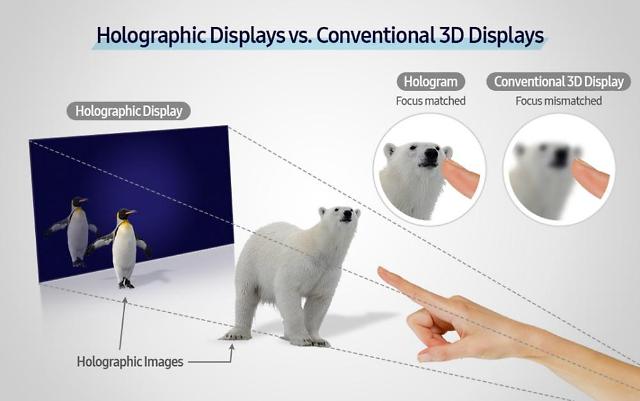 SEOUL -- Holograms have been regarded as the most perfect way to represent objects with light, but their widespread commercialization has been hindered by technological limitations. A research institute affiliated with Samsung Electronics came up with a special optical element to solve the issue of narrow viewing angles, which were seen as one of the biggest barriers to commercialization.

While a conventional display depicts images based on light intensity, holograms control the intensity of light and its phase to produce images that appear three-dimensional, researchers at Samsung Advanced Institute of Technology (SAIT) said in an article posted on the website of Samsung's newsroom.

The human eye utilizes various depth perception cues to recognize the depth of an object. "While most 3D display methods provide only some of these cues, a hologram provides them all. It perfectly replicates objects with light, producing images that look as lifelike as the real thing," An Jung-kwuen, a SAIT researcher, was quoted as saying.

One of the biggest barriers to the widespread commercialization of holograms relates to the correlation between screen size and viewing angle. The optimal viewing angle becomes narrower when a screen is enlarged, and the screen size becomes smaller as the viewing angle increases. In order to solve the issue of narrow viewing angles, the research team developed a special optical element called a steering-backlight unit (S-BLU).

"An S-BLU consists of a thin, panel-shaped light source called a coherent-backlight unit, which transforms an incident beam into a collimated beam, and a beam deflector, which can adjust the incident beam to (the) desired angle," said Won Kang-hee, another Samsung researcher.

A 10-inch 4K screen offers a very small viewing angle of 0.6 degrees, but the research team found that viewing angle can be expanded about 30-fold by bending the image toward the viewer using S-BLU.

The team created a new holographic display and identified a method for generating 4K holographic images in real-time that utilizes a single-chip field-programmable gate array for hologram calculation. The new method optimizes an algorithm by applying conditions that prevent information loss and excessive sampling

"As holograms become more common, we’ll also begin to see more use of non-contact (user interfaces) based on finger gestures, voice, eye tracking, brain wave recognition, and other forms of input," Won said. The research team suggested that adopting a new framework for holographic displays will be key to clearing the most important hurdle to commercialization.