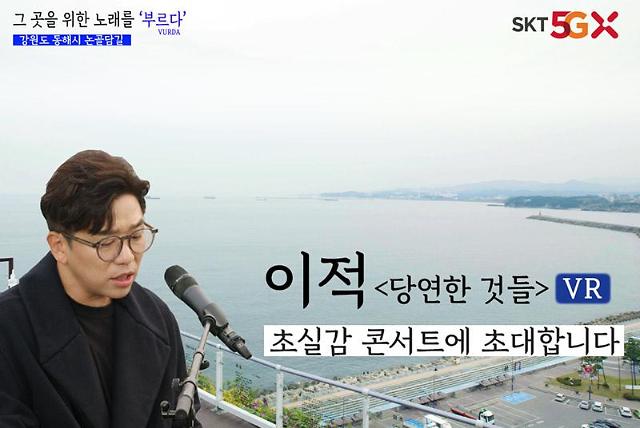 Lee Juck, a 46-year-old singer, holds a VR concert in the eastern port city of Donghae..[Courtesy of SK Telecom ]

VR content will be available from November 9. SK Telecom (SKT), a top mobile carrier in South Korea, used immersive audio technology that vividly captures the sound of wind and other location characteristics at the scene. As the eyes of viewers shift, the sound effect changes, allowing them to enjoy the performance vividly as if they were on the spot.

The project called "a voice uniquely recorded in diverse areas" is designed to deliver vivid performances by famous singers at meaningful attractions and to convey messages of consolation and support. Lee Juck, a 46-year-old singer and composer, held a concert in a beautiful seaside area in the eastern port city of Donghae.

"I hope our VR content produced this time will be a small consolation and support for the people suffering from COVID-19," SKT's PR2 division head Song Kwang-hyun said in a statement. In an April survey of 600 people, conducted by Lee Dong-hun, a professor at Sungkyunkwan University's College of Education, 29.7 percent experienced COVID-19 depression while 48.8 percent suffered from anxiety.

K-pop bands have held online concerts to attract global viewers and support those who were mentally and physically fatigued by the pandemic. BTS' concert from a special studio on June 14 attracted more than 700,000 global viewers, marking the largest paid online concert in the world.