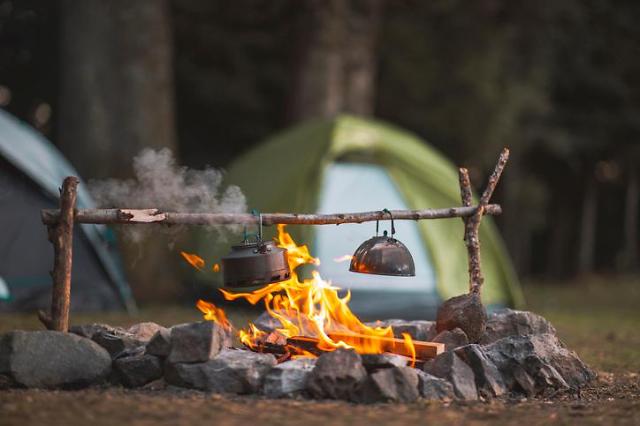 SEOUL -- The camping season usually ends with the cold wind of autumn. South Korean consumers are reluctant to adapt themselves to the change of weather and keep going out for camping in a desperate attempt to chase away "COVID blue," a sign of depression triggered by a coronavirus pandemic.

Emart, South Korea's top megastore franchise, said in a statement on October 20 that sales of camping products were up 117.4 percent on-year in the first 18 days of October. Sales of mattresses increased by 159 percent and sleeping bags by 82.1 percent. "Previously, the main season for camping was spring and summer but thanks to the increased number of camping enthusiasts, the camping season is all year round," an Emart official was quoted as saying.

Camping wares are also popular in online secondhand markets. Campers seek used products such as stoves, tents and other accessories such as portable battery packs, also known as power banks. As temperatures fall below 10 degrees Celsius in the mornings and nights, many people share their know-how on how to stay warm in an outdoor environment or information about less-crowded camping areas.

There are more than four million casual campers in South Korea. The domestic camping market stood at more than two trillion won ($17.5 billion) in 2019, according to the Camping Outdoor Agency, a private agency.

"I find camping the perfect hobby for the COVID-19 pandemic era. I can keep my social distance away from other people and enjoy peace in open areas. I go camping every week," Koo Hyung-min, a 38-year-old businessman in Gumi some 195 kilometers southeast of Seoul (121 miles), told Aju News.