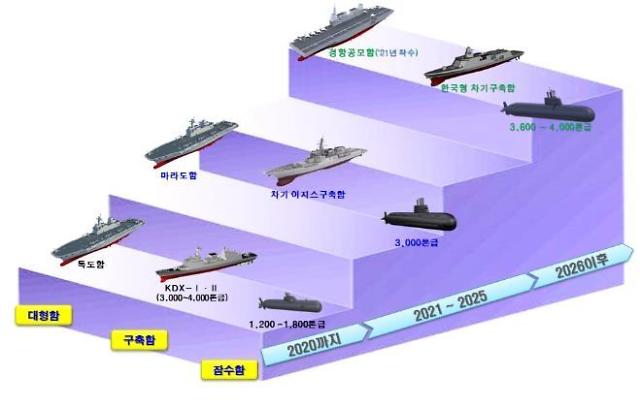 [Courtesy of the Ministry of Defense]


SEOUL -- There is not enough national consensus yet over a costly project to build light aircraft carriers capable of supporting vertical landing combat jets, but South Korea's navy chief unveiled a more specific blueprint for the launch of the first one carrying 430 crew members in 2033 to join an arms race in Northeast Asia to retain carrier task groups.

A defense buildup program unveiled by the defense ministry in August included the development of a 30,000-ton light aircraft carrier. The ministry has launched a research project to see if its Dokdo-class landing ship can be revised to load vertical landing combat jets such as F-35B, the short take-off and vertical landing variant of F-35A stealth fighters. The ministry aims to start basic design in 2021.

The proposed construction of a light aircraft carrier sparked concerns that if there are not enough power assets to be loaded, it could easily be exposed to enemy attacks. Opponents argued that South Korea should use taxpayers' money for more efficient arms systems such as advanced missiles and warships.

At a defense committee in parliament on October 15, Boo Suk-jong, chief of Naval Operations, defended a light aircraft carrier as "a key force to respond to all-round security given its future battlefield environment." "If things go according to our plan, we can see it in 13 years," he said, adding that the flattop would be manned by 430 personnel, although it can be adjustable depending on combat and weapon systems.

When asked about the type of aircraft, Boo said that a decision would be made later, refusing to limit choices. "Other countries can produce vertical take-off and landing aircraft. The type will be decided later," he said.

The navy chief was confident in securing construction technology, saying South Korea has fully accumulated a lot of independent skills through the construction of two amphibious assault ships commissioned in 2007 and 2020 respectively. "We are currently trying to acquire core technologies," he said.

The first amphibious assault ship is 199 meters long, 31 meters wide. It can carry 300 crew members, 720 marines, up to 10 helicopters and a number of assault vehicles. The flight surface was sprayed with urethane.