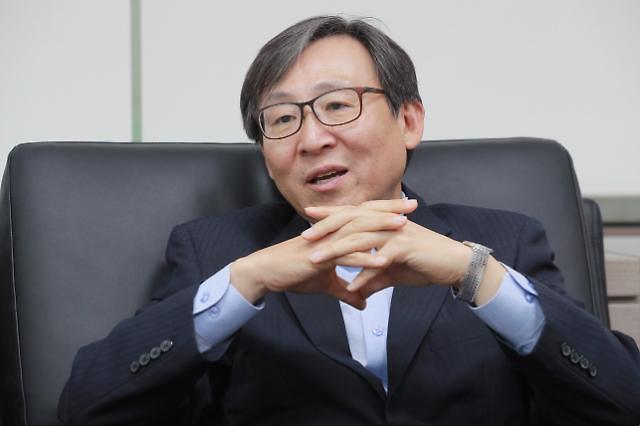 
SEOUL -- South Korea needs bold and preemptive investments "with patience" to nurture its hydrogen industry as a new growth engine, Hydrogen Convergence Alliance (H2KOREA) head Moon Jae-doe said, giving a frank acknowledgment that the country's technical prowess falls behind that of advanced countries in fields other than fuel cell vehicles.

The most important keyword in strategies to vitalize the hydrogen industry is "economy of scale," Moon said, stressing that a hydrogen ecosystem covering production, distribution and charging will be in place through bold and pre-emptive corporate investment to break through hydrogen's low economic feasibility, reduce costs and establish a broad and convenient network of charging stations.

"Like Hyundai's Nexo, South Korea has proven its global technological strength in hydrogen cars, but its technological prowess in hydrogen production and distribution is still far behind other advanced countries," Moon said. H2KOREA, a private-government body launched in 2017 to promote hydrogen convergence alliance, serves as a control tower for the promotion of South Korea's hydrogen economy.

Because of its eco-friendly characteristics, fuel cells are considered the next-generation renewable power source. Fuel cells produce heat, electricity and water through a thermochemical reaction between hydrogen and oxygen. The Seoul government has adopted hydrogen fuel cells and electric batteries as a mainstream fuel in the future with a roadmap to produce 6.2 million fuel cell vehicles for domestic consumption and exports by 2040.

As seen in some other countries, shares of companies involved in hydrogen business have soared, Moon said. "Isn't this the perfect example of the bright future of the hydrogen economy?" He suggested that international cooperation between countries and businesses can be achieved more quickly and effectively to bring forward a hydrogen society.

"We will strengthen networking with international organizations and establish a solid support strategy for international cooperation," Moon said, characterizing Hydrogen as an infinite source of energy for the future. "Hydrogen, which accounts for 75 percent f the universe, is the only clean energy that mankind can produce indefinitely."

Because of growing concerns about a dwindling supply of oil and emissions of pollutants, some countries have tried to adopt hydrogen fuel for their public transport system. However, the commercial use of fuel cell vehicles in South Korea faces an obstacle due to the lack of charging stations in urban areas. Many city dwellers still think hydrogen fuel charging stations are dangerous.

In January last year, the government proposed the production of 100,000 hydrogen cars annually and the establishment of 1,200 charging stations nationwide. "This is a new milestone for the nation's hydrogen industry," Moon said, pledging an active campaign to improve public awareness. "There is no energy as safe as hydrogen if you manage it properly. The use of hydrogen energy in the most extreme situations, such as spaceships and submarines, proves such safety."