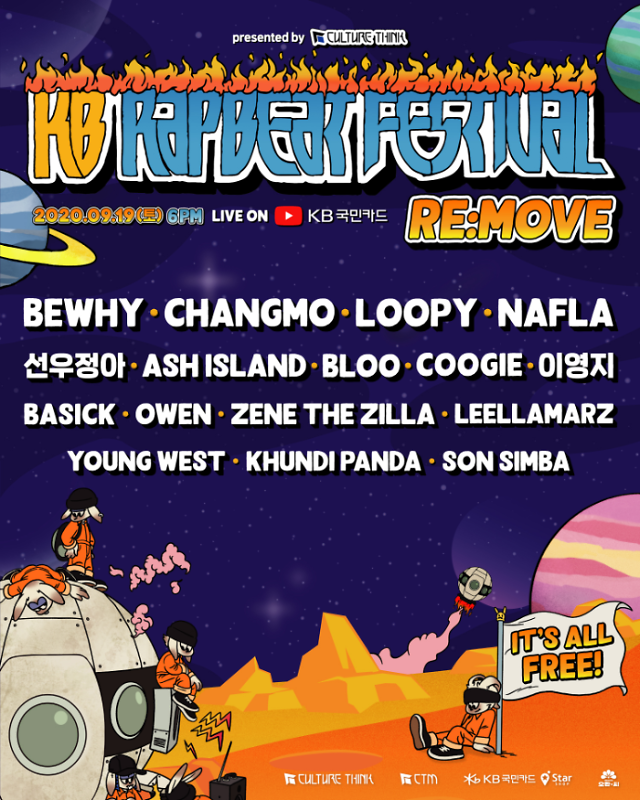 
SEOUL -- Popular hip-hop and R&B artists will hold a free online concert via YouTube in an effort to help South Koreans overcome depression and anxiety caused by a COVID-19 pandemic.

In an April survey of 600 people, conducted by Lee Dong-hun, a professor at Sungkyunkwan University's College of Education, 29.7 percent experienced COVID-19 depression while 48.8 percent suffered from anxiety.

Fears and anxiety about catching a novel coronavirus linger in the community and the emotions were amplified after the number of newly-infected COVID-19 cases that surged again in mid-August following an anti-government rally involving some 3,000 right-wing Christians in central Seoul.

Culture Think, a South Korean concert organizer, said in a statement on September 7 that 16 popular artists of various genres including rappers BEWHY, LOOPY and NAFLA will participate in "KB RAPBEAT FESTIVAL [RE:MOVE]," a free online concert to be broadcast via YouTube at 6:00 p.m. (1100 GMT) on September 19.

"We wish to convey warm-hearted messages of support and comfort through the concert," Culture Think said. KB RAPBEAT FESTIVAL is an annual music festival that covers different genres ranging from hip-hop to R&B and rock. Normally, the concert involves more than 20 popular artists at offline venues such as theme parks and stadiums.

K-pop band BTS has opened a new way for online music concerts by attracting more than 700,000 global viewers to its performance broadcast live through the band's fan community app in June. A maximum number of simultaneous users estimated at 756,600 watched the BTS concert from a special studio on June 14. Big Hit Entertainment said it was the largest paid online concert in the world.

Other K-pop bands such as SuperM, the all-star band that consists of SM Entertainment's artists, and boy band MONSTA X have successfully held online concerts to attract global viewers and support those who were mentally and physically fatigued by the pandemic.