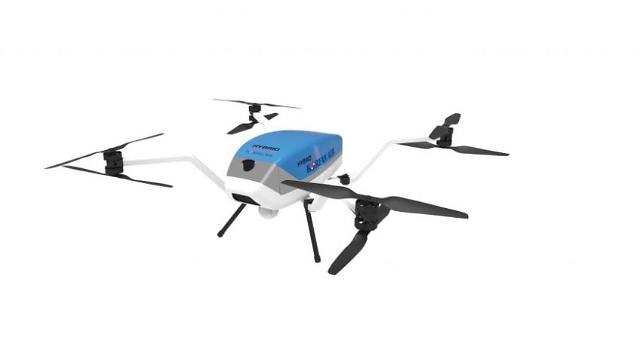 
SEOUL -- Korean Air has forged a partnership with drone operators for the commercial use of its hybrid-powered octocopter unmanned aerial vehicle following a deal to supply it for surveillance by South Korean troops. The drone is equipped with a hybrid propulsion system that combines an internal combustion engine with electric motors.

Korean Air signed a business agreement on August 26 with drone operators for the demonstration and operation of its "hybrid drone." Korean Air will provide education and technology for its partners to develop new markets and find a full-fledged business model. While actively exploring overseas markets, Korean Air would improve the performance of its hybrid drone so that it can be used for fire fighting and industrial plants.

The drone can offer an extended flight endurance of up to two hours and fly at a top speed of 72 kilometers (45 miles) per hour with a maximum altitude of 500 meters, Korean Air said, adding it is designed for operation in temperature conditions of between minus 20 degrees Celsius and 45 degrees Celsius.

The drone is equipped with electronic optics and infrared cameras to capture high-resolution images and transmit them in real time. Various mission equipment can be replaced depending on the purpose of operation. In July, Korean Air secured a deal from the Defense Acquisition Program Administration in charge of arms acquisition to supply six hybrid drones. Additional supply is possible after a test run.