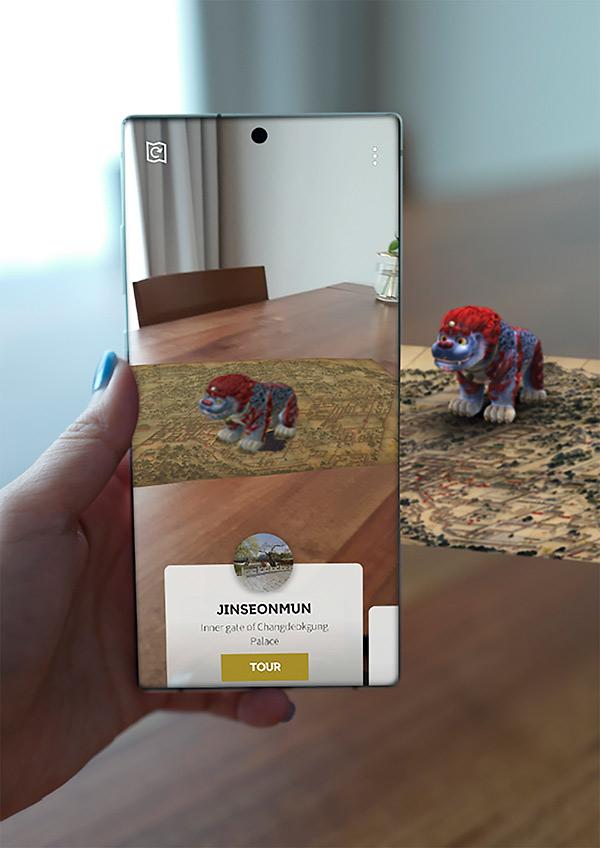 
SEOUL -- Regardless of their location, anyone living outside South Korea can take a virtual tour of the beautiful scenery of an ancient palace designated as a UNESCO World Heritage Site by using a free augmented reality service based on technology developed by SK Telecom and Google.

SK Telecom (SKT) said that foreigners who are unable to visit South Korea due to a COVID-19 pandemic can watch Changdeokgung Palace from August 24 by downloading Changdeok ARirang at Home, an AR app, from Google Play.

Changdeok Palace, which is one of the palaces used by the Joseon Dynasty (1392–1897), was designated as a UNESCO World Heritage Site in 1997. The palace is regarded as a masterpiece of Korean palace architecture. Behind the palace lies a beautiful garden, known as the forbidden or secret garden, for the private use of kings.

"In the post-COVID-19 era, it is meaningful to launch a (non-contact) culture viewing service that can promote South Korea's cultural heritage around the world," Yea Hui-kang, who heads SKT's brand marketing division, said in a statement.

Upon activating the app and holding Galaxy smartphones towards a home table or sofa table, Haechi, a mythical animal regarded by Koreans as a guardian against fire and other natural disasters, guides people and provides detailed information in English on nine spots in the palace as well as historical stories. Viewers can look around 360 degrees or enlarge paintings.

SKT said it would expand AR viewing courses in Changdeok Palace sequentially in cooperation with Google. Together with the Cultural Heritage Administration and Google, SKT launched an AR service based on 5G edge cloud in July to provide an immersive experience for visitors of Changdeokgung Palace.

The app launched in July allows visitors to watch a royal court dance performance, play traditional games, or take pictures in augmented reality. 5G Android smartphone users can download the app from Google Play and One Store. The app was the result of joint working by SKT, Google, Nexus Studios, an animation and interactive studio based in Britain, and Seerslab, an augmented and virtual reality corporation in South Korea.