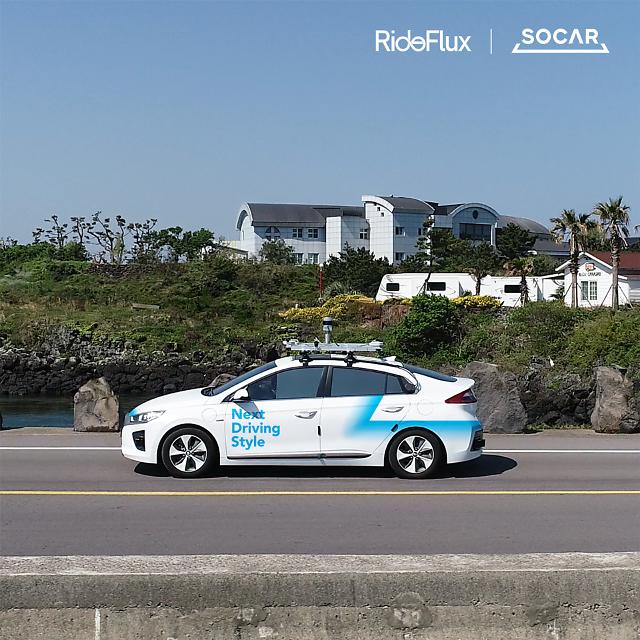 
SEOUL -- In an effort to diversify future mobility services, South Korean car-sharing company Socar has started the demonstration of an autonomous shuttle service using a modified Hyundai electric vehicle in the southern resort island of Jeju.

SoCar said in a statement that the self-driving shuttle service began on Monday to carry customers from an airport in Jeju to the company's rental car parking lot. Unlike other autonomous shuttle services being tested on roads at night time to avoid heavy traffic, SoCar launched a service of day and night to cover a route of about five kilometers (3.1 miles).

The autonomous vehicle based on Hyundai's full-electric vehicle Ioniq uses technologies developed by RideFlux, an autonomous driving technology company based in Jeju. The shuttle is embedded with artificial intelligence (AI) technology that allows the vehicle to plan its course on the streets while recognizing other on-road traffic.

The shuttle can carry two passengers at a time and a SoCar employee will be at the driver's seat to avoid accidents and other unexpected safety-related situations. RideFLux has tested autonomous vehicles on the roads of Jeju since 2018.

SoCar began car-sharing services similar to conventional rent-a-car services in South Korea in 2011. Customers use smartphone apps to reserve vehicles parked in public parking lots. The service has been favored by young consumers because car-sharing fees are based on mileage, making an ideal service for those who travel short distances in urban areas.

South Korea netted with super-fast mobile communication networks, has become a favored testbed for autonomous shuttle and connected vehicle services. LGU+ teamed up with Seoul National University and AUTOMOS, a domestic autonomous driving vehicle maker, for a state-sponsored pilot program to demonstrate a self-driving shuttle service in Siheung, a southwestern satellite city of Seoul, in the second half of this year.