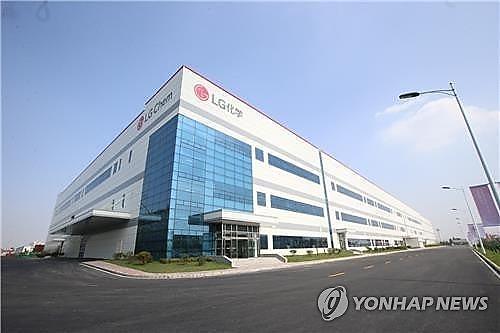 
SEOUL -- Lucid Motors, an American electric car maker, will use new cylindrical cells supplied by LG Chem, a lithium-ion battery maker in South Korea, for the standard version of Lucid Air, a high-performance luxury sedan that will be unveiled this year.

LG Chem said on Tuesday that it would supply cylindrical lithium-ion cells to Lucid Motors, based in Newark, California. Lucid Air's commercial production will begin in late 2020. Financial terms and other details were not disclosed.

LG Chem said that its battery with higher capacity and better performance than existing ones is 21mm in diameter and 70mm in height. The long-term supply deal will help LG Chem secure all business portfolios in the electric vehicle market, which is bisected by large pouches and small cylindrical cells.

Lithium-ion batteries have the weakness of taking too long to charge and discharge. Battery suppliers are trying to develop cheaper, more efficient, more powerful batteries, but there are challenges with using small cylindrical cells Tesla has in its battery packs because the cells require a lot of thermal cooling, sensors and wiring.

Lucid Motors said in a statement that LG Chem's battery cells would power Lucid Air's standard versions through 2023 with additional agreements to be announced in the future for special versions. "LG Chem is pleased to join as a core partner in Lucid Motors' journey to produce industry-changing luxury EVs," Kim Jong-hyun, president of LG Chem's energy solution division, was quoted as saying.

Battery makers in South Korea, China and Japan have been locked in a fierce battle to expand their share in the market for electric vehicle batteries. To maintain a competitive edge in technology, LG Chem and Samsung SDI, the battery producing arm of Samsung Electronics, are trying to produce third-generation batteries.

In December 2016, Samsung SDI and Lucid Motors agreed to work together on the development of new cylindrical cells.

LG Chem forged a deal with General Motors in December 2019 to set up a joint venture with a combined investment of $2.3 billion, for the development of advanced battery technologies. The tie-up followed GM's $28 million investment in its Warren, Michigan battery lab. GM plans to introduce at least 20 new all-electric models by 2023.