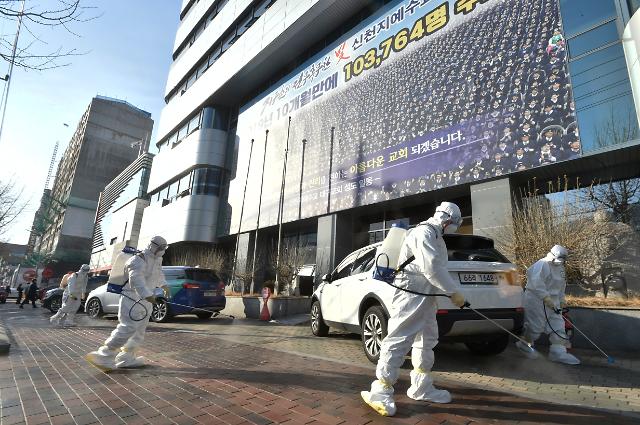 SEOUL -- Shincheonji Church of Jesus, a religious organization which was once caught up in a dispute over alleged heresy, has closed chapels after regretting an overnight surge in the number of patients infected with a new coronavirus due to one follower who participated in services before being quarantined.

As of Thursday morning, the number of confirmed patients in South Korea soared to 82, with 51 new cases reported this week. One was discovered at a nose, ear, and throat hospital near the presidential office in central Seoul.

Health officials found that more than 30 new patients affiliated with Shincheonji came mostly from the southern city of Daegu and its surrounding North Gyeongsang province, sparking a widespread health scare especially after the 31st patient identified as a 61-year-old woman was guaranteed on February 17.

The woman living in Daegu was involved in brisk outdoor activities. Before showing symptoms of pneumonia and fever, she had been at a wedding ceremony, a buffet restaurant and a service in the nine-story Shincheonji temple in Daegu. Video clips circulating online showed Shincheonji followers sitting closely on the bare floor for a service or singing with arms around shoulders.

Without realizing that a patient was infected with the virus, he or she may have attended at least two rounds of services involving a total of 1,001 followers, according to the Korea Centers for Disease Control and Prevention (KCDC).

"Since the worship service was held for about an hour and a half in a very dense environment in the chapel, such environmental requirements and the nature of the virus itself have worked to increase the capacity of transmission," KCDC director Jeong Eun-kyeong told a regular press briefing on Thursday.

Those who had stayed together with the patient were ordered to go into two weeks of quarantine at their homes, Jeong said, adding her center would acquire a list of 8,000 other members of the Shincheonji temple in Daegu to take similar steps.

The head office of Shincheonji located in Gwacheon, a southern satellite city of Seoul, said in a notice published on its website: "All related facilities, including local churches and meeting places, are prohibited and services and gatherings are replaced by online and family services."

Shincheonji, established by Lee Man-hee in 1984, claims the number of followers is far above 100,000. The doctrine centers on The Book of Revelation. The Presbyterian Society has defined Lee's organization as a cult, saying that followers are taught to believe that the founder is the second coming or the returned Jesus Christ.

Shincheonji claims that the Bible is written in metaphors and only its founder could interpret and understand. The organization says Shincheonji refers to "New Heaven and New Earth" and the pastor of Shincheonji is creating "God's kingdom of heaven here on earth, exactly as he witnessed it in heaven."

"Just as Moses built a tabernacle on earth based on the patterns God had shown him from heaven, the creation of Shincheonji here on earth today is also based on what the Promised Pastor had seen in the spiritual realm," Shincheonji wrote in an English introduction page on its website.