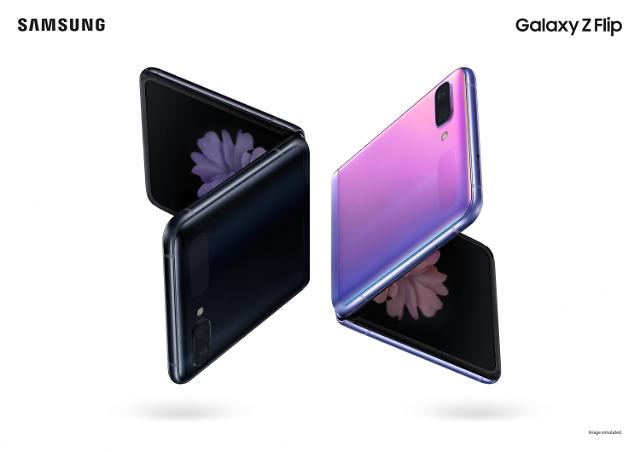 SEOUL -- Samsung Electronics' sales philosophy of providing the best product to consumers was reflected on its second foldable phone, Galaxy Z Flip, which adopted an ultra-thin glass panel for the first time in the global foldable phone market where other brands use polyimide films as flexible displays.

The ultra-thin glass (UTG) display used for Galaxy Z Flip, scheduled for release on February 14 in the United States and South Korea, is more resistant to scratches and durable than colorless polyimide (CPI) films used in Samsung's first foldable phone, Galaxy Fold, which was released in September last year. Samsung said the UTG display is foldable for more than 200,000 times.

"Our aim is to provide our customers with the latest, the most advanced material," a Samsung PR manager told Aju News on condition of anonymity on Thursday, explaining why UTG was chosen over CPI.

"We designed Z Flip to be compact when it's folded and provide the same user experience as other smartphones when it is unfolded," she said, adding UTG matches the concept of Z Flip.

Because of its versatility and flexibility, CPI films are now widely used as an alternative to glass displays, which is more fragile and less flexible. However, CPI films are prone to scratches and creases that are created when folded and unfolded repeatedly over a long time. Also, some users find it not clear or transparent enough compared to glass displays.

The downside of CPI was clearly shown in Galaxy Fold when its mass-produced version was handed to reviewers in April last year. Samsung's ambitious work was heavily criticized for the weak durability of its display which had creases build up in just a few days.

Some reviewers damaged the display of Galaxy Fold while trying to peel off a protective film adhered to the display, thinking it might be an ordinary vinyl film commonly found on brand new devices. The hinge was also criticized as reviewers found it easy to break due to foreign substances. The unexpected, chaotic situation prompted Samsung to postpone the release of Galaxy Fold.

Galaxy Fold was finally released in September with reinforced display and hinge. Despite its minor issue that surfaced during the pre-release period, the foldable smartphone received positive feedback from users around the world.

Samsung has installed an upgraded version of Galaxy Fold's display hinge into Z Flip. It has special fibers inside to prevent foreign substances from entering the phone. The hinge can be fixed in many different angles to have Z Flip sit by itself or fold out completely like conventional smartphones.

UTG offers many advantages over plastic or silicon. Hardened UTG is scratch-resistant and bendable and shows no signs of fatigue, making it an ideal substrate or encapsulant for OLEDs that ultimately make bendable or foldable displays possible.

To secure the stable supply of UTG panels, Samsung has incubated Dowoo Insys, which was established in 2010 as a venture company.