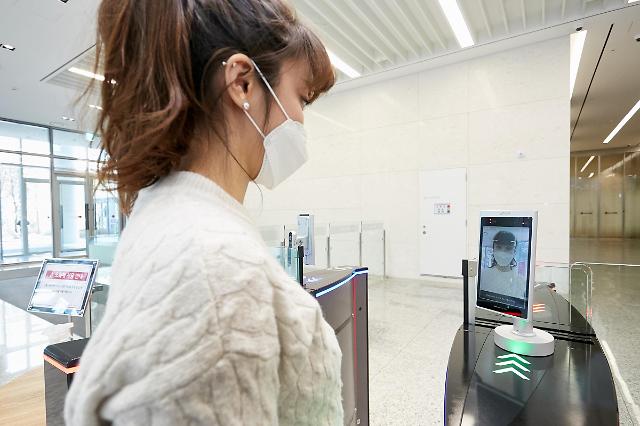 
SEOUL -- Compared to other biometrics such as fingerprint or eye iris, the accuracy of a facial recognition system is lower, although it is widely used as access control in security systems due to its contactless and non-invasive process.

Facial recognition systems work, in general, by comparing selected facial features from given images with faces within a database. An artificial intelligence-based application can identify a person by analyzing patterns based on the person's facial textures and shape.

Through cooperation with SenseTime, an AI SaaS (Software as a Service) company founded in Hong Kong, LG CNS, an IT service provider in South Korea, has developed an advanced facial recognition system for actual and effective use at its head office located in LG Science Park, a sprawling 26-building research complex for LG Group.

The system installed at LG CNS' 26 security doors recognizes faces and analyzes facial information with AI technology to control identification and access. LG CNS said on February 11 that face recognition ends in 0.3 seconds because the system can distinguish people only by their facial contours, eyes and appearance around their noses.

Recognition is possible even when those wearing masks pass the entrance gates looking at smartphones. LG CNS said employees can pass through security doors without having to make a cumbersome stop because faces can be recognized within two meters.

"Except when faces were heavily covered or changed, recognition is possible despite various constraints in the real world, such as mask, glasses, makeup, and face angle. Accuracy exceeds 99 percent," an LG CNS official said. "Those wearing masks can be identified even they pass the entrance gates looking at smartphones."

"The existing biometric authentication method, such as card recognition or fingerprint iris, needs to take out cards and bring their fingers or eyes closer to the device, but our face-recognition access service helps ease such inconveniences," the official said.

Face-recognition devices can store, process and analyze face information. Each device can store the face information of up to 50,000 people. Because it works without being connected to the external internet, normal service is possible in the event of server or network failure.

"We will push for open innovation with SenseTime and expand our business to various areas such as the detection of intrusion into restricted areas by combining AI and physical security technologies in CCTV and other video areas," LG CNS’s Joo Seong-jin is in charge of security and IoT was quoted as saying.

Through cooperation with Deep Glint, which specializes in computer vision and deep learning technologies, Hyundai Mobis plans to develop technologies that can analyze the faces of drivers and passengers to identify emotions. Facial recognition can be used to open the door or start vehicles, prevent drowsiness driving, and detect health problems in real time.