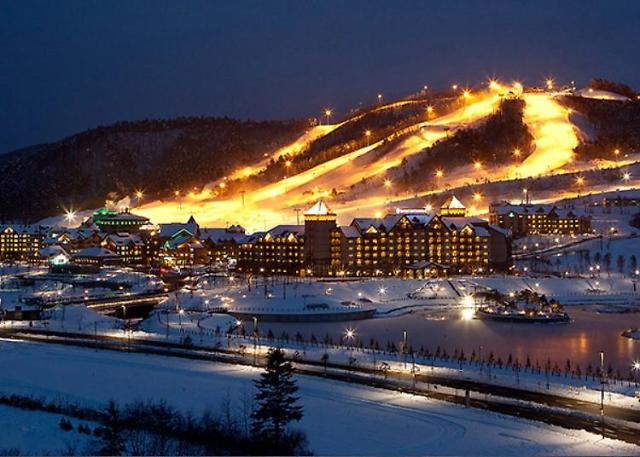 SEOUL -- The northeastern province of Gangwon has been saddled with chronic debts since South Korea hosted its first Winter Olympics in 2018 in Pyeongchang, a typical example of Olympic hangovers which are common among previous host cities.

Nearly $14 billion was spent on the Olympics, but it's not easy for South Korea to recover its investment to build expensive infrastructure and winter sports facilities, including the Alpensia Resort which has slopes for skiing and snowboarding, a ski jumping stadium, a waterpark, two golf courses and accommodations.

Some Olympic facilities have become white elephants, prompting Gangwon Province Governor Choi Moon-soon to actively find foreign investors who will take over the operation of Alpensia. At the end of last year, Alpensia's debt stood at more than 700 billion won ($603 million). The resort's construction involved some 1.6 trillion won from Gangwondo Development Corp., a public company funded by the province.

Choi finally heaved a sigh of relief on Monday after a consortium led by McKinley, a U.S.-based international financial group, signed an agreement to conduct due diligence on assets and accounting for the acquisition of Alpensia. The consortium also groups companies from China and Hong Kong,

"We are publicly selling Alpensia, which has long been a major concern for Gangwon residents, in earnest," Choi said. "After the sale, the Alpensia area will be transformed into an international peace city and a 5G-based theme park through further development."

After an on-site inspection for three months from February 17, the provincial government plans to sign the main contract in May if the two sides agree on prices. The sale amount was tentatively set at around 800 billion won.

There are doubts among market watchers due to a history of broken negotiations with potential foreign buyers. However, Choi showed strong expectations on a deal with the McKinley consortium. "It's completely different from previous deals," the governor said, adding the McKinley consortium has already conducted several on-site surveys with a plan to invest about one trillion won.

Pyeongchang is very well connected to the rest of Korea through newly-built highways and a bullet train line that links Seoul to the eastern port city of Gangneung. It is surrounded by many tourist destinations and close to Mountain Seorak in a national park frequented by millions of visitors every year.