Incheon airport gateway embarks on expansion of facilities and infrastructure 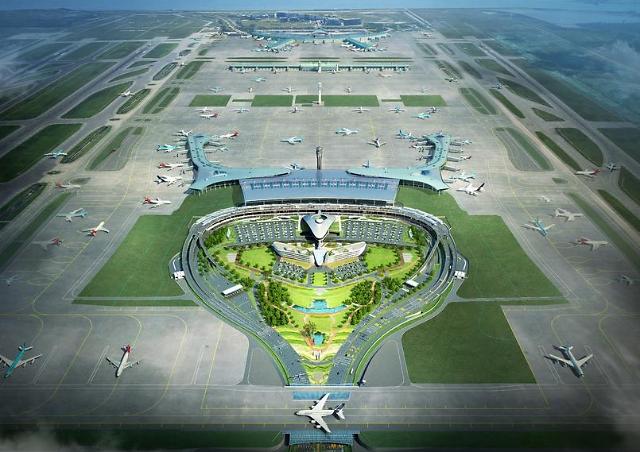 
SEOUL -- Far from being content with its reputation as one of the world's best airports, Incheon International Airport, South Korea's main gateway west of Seoul, embarked on the expansion of facilities and infrastructure to provide customized services that utilize big data, virtual reality and other new technologies, 22 months after it opened the second passenger terminal.

With an injection of 4.84 trillion won ($4.15 billion), the airport built on reclaimed tidal land will build a new runway and expand its second terminal, mooring facilities and a connecting transport network by 2024 after a ground-breaking ceremony on Tuesday, according to the Ministry of Land, Infrastructure and Transport.

The Incheon airport has polished its reputation as a smart and connected airport since it opened the second terminal furnished with artworks, guiding robots, digital screens and other modern facilities for quick safety clearance in January 2018. The first terminal had been rated the world's best, cleanest, and best international transit airport for 12 consecutive years.

With its new expansion project, the airport aims to become the world's third-biggest in terms of passenger accommodation capabilities. In 2024, it is capable of handling 106 million passengers a year, the transport ministry said, adding customized services utilizing new technologies such as big data, Internet of Things, virtual reality and augmented reality would be provided.

"We plan to provide more convenient, safer and faster airport services for users," the ministry said in a statement, citing intensifying competition to preempt a hub airport in Northeast Asia and rising demand for air traffic. "In response to such air demand, we will complete the fourth phase of construction by 2024 to properly expand infrastructure and consolidate its status as a representative airport in Northeast Asia."