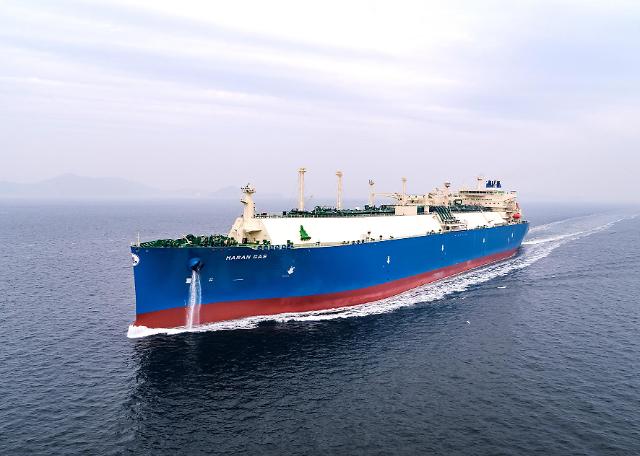 SEOUL -- Daewoo Shipbuilding & Marine Engineering (DSME), a major shipbuilder in South Korea, has delivered a liquefied natural gas (LNG) carrier for a Greek client. It was the first LNG carrier which has been installed with the shipbuilder's air lubrication system that enables energy-saving and emission reduction.

DSME said that compared to existing LNG carriers, the new vessel installed with its air lubrication system (ALS) can save fuel by more than five percent. The delivery followed an order the shipbuilder received in June 2016 from Maran Gas Maritime, a unit of Angelicoussis Shipping Group.

ALS works on the simple principle of trapping a layer of air bubbles beneath the ship's hull. Air bubble outlets are created at different locations along the bottom of the hull. The air is blown at a constant rate to form a uniform layer of bubbles, which reduces the drag and resistance between the ship and the seawater.

Maran Gas confirmed fuel savings in a test drive in October and wanted DSME to apply ALS to a next vessel, the shipbuilder said, adding it would expand the use of its ALS technology to super-large container ships, LPG carriers and medium oil tankers.

With rising fuel prices and increasing pressure to make ships greener, shipping companies are now implementing promising technologies that can reduce the levels of toxic Sulphur oxides (SOx) emitted by ships and save fuel at the same time.

The scrubber technology passes the dirty exhaust gas stream created by the engine through chambers that contain a carefully generated "scrubbing cloud" of water. But scrubbers and selective catalytic reduction (SCR) units increase the cost of both building and operating ships, prompting ship owners to find alternative fuels such as LNG.