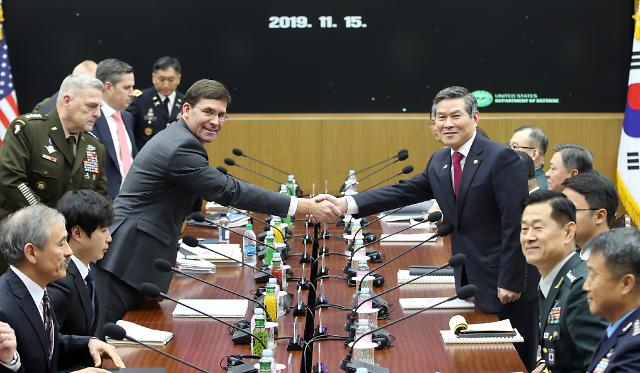 
SEOUL -- North Korea urged the United States to put forth "a basic solution" for lifting its hostile policy ahead of high-level annual military talks between Seoul and Washington that would cover sensitive topics such as the cost of keeping American troops and strategic assets on the Korean peninsula and joint exercises regarded by Pyongyang as a rehearsal for war.

For a successful denuclearization deal, North Korea's chief nuclear negotiator, Kim Myong-gil, a foreign ministry roving ambassador, urged Washington to put forth "a basic solution" for lifting its hostile policy harmful to Pyongyang's rights to existence and development instead of "matters of secondary importance" like the establishment of a liaison office.

"If the U.S., failing to put forth a basic solution for lifting the anti-DPRK (North Korea) hostile policy harmful to our rights to existence and development, thinks that it can lead us to negotiations with war-end declaration, which may reduce to a dead document any moment with change of situation, and with other matters of secondary importance like the establishment of a liaison office, there is no possibility of the settlement of the issues," Kim said in a statement published by Pyongyang's official Korean Central News Agency (KCNA).

"But I intuitively feel that the U.S. is not ready to give a satisfactory answer to us and its proposal for dialogue with us is a trick to earn time through the orchestration of DPRK-U.S. meeting. Explicitly speaking once again, I am not interested in such a meeting," he said.

Pyongyang condemned a "trite" U.S. attitude as the cause of a failed deal in nuclear talks in Stockholm on October 5 and refused to sit down for fresh dialogue until Washington takes a substantial step to make the complete and irreversible withdrawal of its hostile policy. North Korean leader Kim Jong-un has threatened to take a different path, urging Washington to come up with a "fair" and "mutually acceptable" deal by the end of this year

The U.S.-North Korea summit in Vietnam in February broke down without an agreement. However, U.S. President Donald Trump surprised the world with a historic rendezvous with Kim Jong-un on June 30 and became the first U.S. head of state to step onto the soil of North Korea in the truce village of Panmunjom, a symbol of division and Cold-War confrontation.

The North's statement on Friday coincided with the annual Security Consultative Meeting (SCM) in Seoul, which was chaired by U.S. Secretary of Defense Mark Esper and his South Korean counterpart, Jeong Kyeong-doo. The allies have suspended or scaled back joint exercises to help facilitate negotiations on how to realize denuclearization. "We will adjust our exercise posture, either more or less, depending on what diplomacy may require," Esper told reporters before arriving in Seoul.

Other issues of concern at this year's SCM are Washington's relentless demands for a sizable increase in sharing the cost of keeping some 28,000 American troops in South Korea, and the General Security of Military Information Agreement (GSOMIA), a pact on sharing sensitive military information between Seoul and Tokyo.

The pact expires this month, but South Korea is reluctant to extend it in retaliation for Japan's trade retaliation orchestrated by Prime Minister Shinzo Abe. Washington, which has tried to set up a trilateral security alliance aimed at checking China and Russia in Northeast Asia, wants Seoul to change its mind.