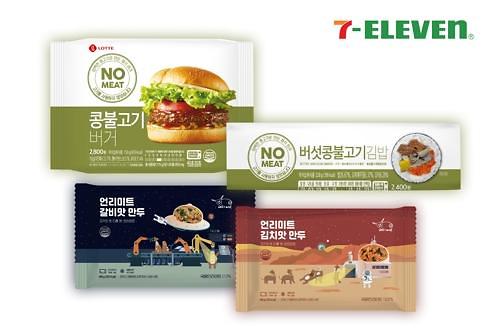 SEOUL -- South Korean convenience stores, known for a variety of ready-to-eat meals, are in fresh competition to attract vegan consumers with menus pre-cooked with vegetable ingredients such as soy meat.

In South Korea, it is not hard to grab a simple meal at any time of the day. Ready-to-eat meals, also known as home meal replacement (HRM) menus, such as instant burgers, Gimbab (rice, meat and other ingredients wrapped in seaweed) and other gourmets like spaghetti are available at some 38,500 convenience stores which are open 24 hours a day.

According to the Korea Vegetarian Union, the number of vegans is steadily increasing. There are about 1.5 million vegans as of 2018, up sharply from 150,000 in 2008. The number of people who prefer vegetarian menus is increasing due to health concerns. There are only about 350 vegan restaurants in South Korea. Because ready-to-eat menus sold at conveniences contain meat, it is hard for vegans to find a decent meal-to-go.

On Tuesday, CU released a lineup of lunchbox menus of pasta and burgers for vegans. The franchise said that all vegan menus are made of 100 percent vegetables and replaced meats with soy meat. Eggs, butter and other ingredients which come from animals are not included. A day later, 7-Eleven released Mandoo (Korean steamed dumplings) for vegans, saying that all ingredients were made of brown rice, oats and nuts. The franchise plans to introduce more vegan menus soon.