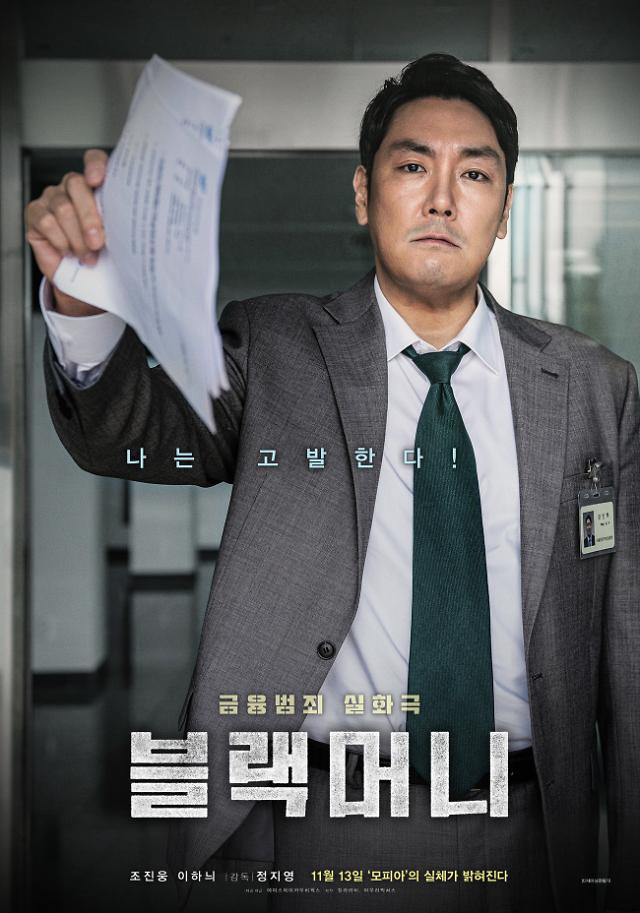 SEOUL -- Chung Ji-young, a veteran film director and screenwriter known for dealing with sensitive social and political topics, complained of hard times he had to endure under previous conservative governments, speaking about "Black Money", a crime film based on a real story involving US private equity fund Lone Star.

The film starring Jo Jin-woong, Lee Ha-nui, Lee Kyung-young and Kang Shin-il will be released on November 1. It marked Chung's first film in seven years. Among his films are North Korean Partisan in South Korea (1990), White Badge (1992), Life and Death of the Hollywood Kid (1994), Unbowed (2012) and National Security (2012).

Jo acts as a prosecutor who is known for being headstrong. A suspect commits suicide during an investigation, putting the prosecutor into a difficult situation. The prosecutor looks for the reason to clear himself of suspicion and find that the suspect was a material witness in a huge financial scandal.

Chung said his preparations began six years ago cautiously because the film was based on a real story, but it took a long time to make it because he was blacklisted by previous conservative governments. The blacklist of outspoken artists and cultural figures, including famous movie director Park Chan-wook, who won the grand prize at the Cannes Film Festival in 2004, came to light after ex-president Park Geun-hye was impeached and jailed in 2017.

"First of all, it was ridiculous," the director told reporters. "Since the Lone Star case took place under the previous administration, I thought it would not draw investors," he said. "So I received public funding, and investors emerged as times have changed. That's why I did it."

People live in the age of financial capitalism but they don't know well, Chung said. "This movie tells the true story. I thought it would be good if we all agonized and laid bare, and discussed it."

In 2003, Lone Star purchased a 50.5 percent stake in KEB Hana Bank, formerly known as Korea Exchange Bank (KEB) for 1.4 trillion won ($1.2 billion) before selling its stake to Hana Financial Group for 2.02 trillion won in 2012. The agreed selling price was set at 3.91 trillion won, but payments brought down the final price to 2.02 trillion won.

KEB's quick turnaround raised suspicions that the bank might have been unfairly sold off, leading to an investigation and lawsuits. Lone Star has claimed that the Korean government interfered in the price negotiations, putting pressure to lower the buyout price.

Chung said his goal is to make movies fun and attract audiences, though he chooses the subject matter with a critical view of society. "In fact, the general public doesn't know much about economic stories. I was a commoner, too. It was difficult from the scenario process."