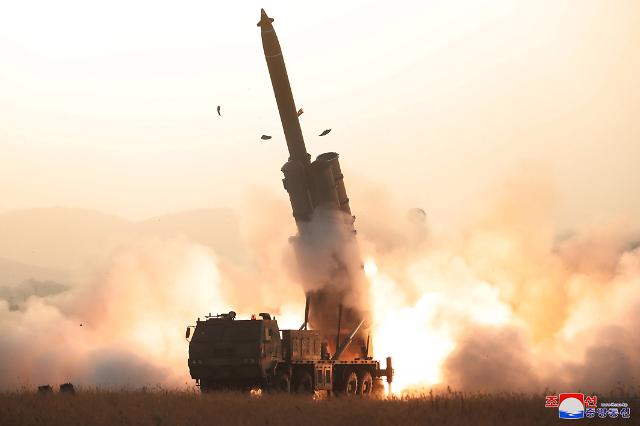 
SEOUL -- North Korea claimed to have successfully verified the security of a continuous fire system in the test launch of "super-large" multiple rocket launchers. It was part of North Korea's push for the development of new solid-fuel weapons to replace a stockpile of inaccurate liquid-fuel short-range missiles.

Thursday's test was organized to verify the security of the continuous fire system of launchers, according to Pyongyang's official Koran Central News Agency (KCNA). "The perfection of the continuous fire system was verified through the test-fire to totally destroy with super-power the group target of the enemy and designated target area by surprise strike of the weapon system of super-large multiple rocket launchers."

Two projectiles, launched eastward from an area in Sunchon, a city in South Pyongan province, flew up to 370 kilometers (229 miles) at an altitude of 90km, South Korea's military said earlier, adding their trajectory was similar to 600-㎜ multiple rocket launchers tested on August 24 and September 10.

Pictures released by KCNA showed a transporter-erector-launcher (TEL) with four launch tubes. In previous launches, two shots flew at intervals of 17 minutes and 19 minutes each, but the interval was narrowed to three minutes in the latest test that demonstrated technological progress.

Experts say North Korea's new multiple-launch guided rocket system with a range of at least 250 km should be characterized as a ballistic missile system. The new multiple-launch guided rocket system will increase opportunities to choose between multiple-launch rockets and "real" short-range ballistic missiles in tailoring some attacks and complicate the task of U.S. and South Korean missile defenses, Vann H. Van Diepen, a consultant who worked in a variety of positions in the U.S. Department of State, said in an article published by 38 North, the website of a U.S. think tank, in early August.

Since the late 1980s, North Korea has deployed relied on liquid-fuel Hwasong 5 and 6 SRBMs, based on Soviet-made Scud missiles, that can strike targets at a range of 300 and 500 km respectively, but they are "notoriously inaccurate, a shortcoming that limits their military utility unless armed with nuclear warheads," Michael Elleman, a missile expert at the International Institute for Strategic Studies (IISS), said in an article published by 38 North, the website of a U.S. think tank, on October 10.

-- The KN-23, whose external features closely resemble the Russian Iskander missile, can possibly fly more than 600 km, while the KN-24 has been tested to a range of up to 400 km. KN-23 and KN-24 missiles are likely armed with either a unitary warhead containing roughly 400 to 500 kg of high-explosives, or a submunition warhead packed with a few hundred smaller charges.

"All four missile variants employ flattened trajectories to ensure that they remain below an altitude of about 50 km, where the atmosphere is dense enough to effect course corrections using aerodynamic surfaces over the missile’s entire flight path," Elleman said, adding they should be capable of "active steering throughout flight and diving toward a designated target to achieve highly accurate delivery of warhead."