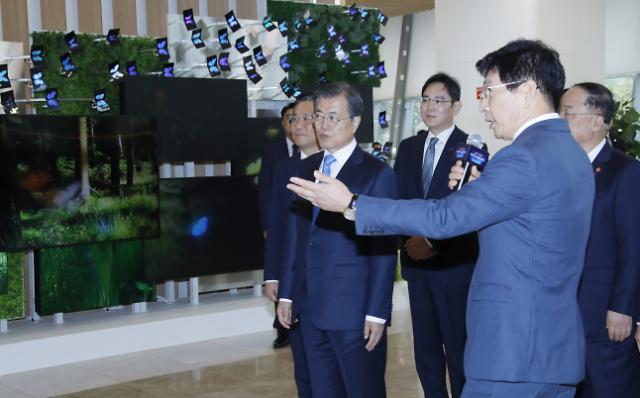 President Moon Jae-in attends a ceremony hosted by Samsung at the base of Samsung Display on October 10. [Yonhap Photo]

The investment was disclosed by Samsung Group's virtual head Jay Y. Lee in a ceremony on Thursday at the base of Samsung Display in Asan, about 60 kilometers (37 miles) south of Seoul, three months after LG Display announced an investment of three trillion won in production facilities for large OLED panels.

To cope with an aggressive investment by Chinese companies that have glutted the global market for liquid crystal displays (LCDs), Samsung made an inevitable choice to shut down one of its LCD lines in Asan in September. The new investment underlines Samsung's strategic shift to widen a technological gap in next-generation technologies.

"It is a difficult time due to the slowing global economy and various uncertainties, but we will continue to do our best to innovate next-generation technologies and nurture talent," Lee said, describing display as "a dream platform that connects people, the world, time and space." "I believe it is a future growth industry that can create new values in areas as infinite as our imagination."

Samsung aims to produce 30,000 sheets of 65-inch QD-OLED panels a month by revamping production facilities in Asan before boosting production gradually. About 3.1 trillion won was earmarked for the development of technologies.

Samsung's investment brightened prospects for South Korea's display industry, Moon said, praising Samsung's bold investment with a determination to maintain its dominant position in global markets. "It is important to keep the top spot by changing the landscape of the global display market."

The display industry is the "fast-growing blue ocean" as global OLED demand is expected to double by 2024 from $23.2 billion last year, Moon said. "We need to take the lead in next-generation display markets based on our competitive edge in OLED, which is the world's No. 1," he said, promising to inject some 400 billion won in state money over the next seven years into the development of next-generation display technologies.

In Asan, Samsung signed a convention on cooperation with small companies and research institutes to localize core materials, parts and equipment. South Korea has been trying hard to localize key materials since Japan imposed restrictions on July 4 on exports of three key materials for microchips and displays.

Samsung's new investment came as South Korea's two flat-panel makers are locked in a battle to take the upper hand in large premium televisions. Samsung has promoted QLED, a short-term strategy before moving to self-emitting displays, while LG has accelerated the production of OLED panels.

Samsung thinks QD OLED, a hybrid technology, will provide a solution to the limitations of OLED panels which are self-emissive and require no backlight but their output is dimmer than LED panels. A QD-OLED panel would use a blue-light OLED panel acting as a backlight, with a quantum dot filter converting this into red or green light.