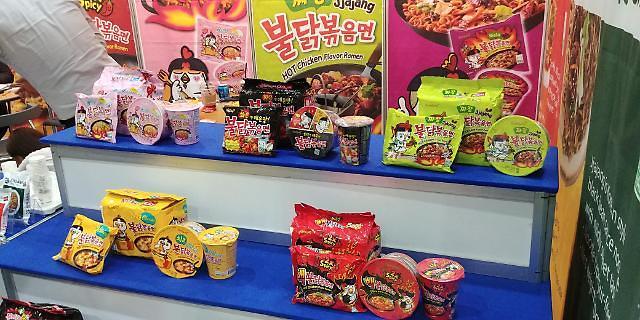 Samyang's "Hot Chicken Flavor Ramyeon" is on display at a halal food exhibition in Seoul in 2018. [Photograph by Park Sae-jin ]


SEOUL -- KT, South Korea's largest telecom company, will make a foray into South Korea's growing halal food industry by partnering with B-square, a local blockchain developer, to co-develop a platform that would be used for the management and authentication of halal food certifications.

KT said in a statement on Monday that the company has signed partnership agreements with the Korea Muslim Foundation and B-Square to co-develop and operate a "Halal Certification Trust" platform by the end of this year. The platform will digitally systemize halal certification and authentication processes to provide simple step-by-step services on smartphones and personal computers.

The previous halal certification process issued actual certificates printed on the sheets of paper and they can be easily forged. KT said the new blockchain-based system will solve such problems.

Thanks to the growing global presence of K-pop, South Korea's iconic ready-to-eat products such as ramyeon instant noodles and Samgyetang, a ginseng chicken soup, have gained popularity in the Middle East and Southeast Asia.

Last year, "Daebak" instant noodles have captured the hearts of Muslim consumers in Malaysia by selling two million noodle packs during its first month of release. The halal-certified Ramyeon, produced by Shinsegae Food, gained popularity among young consumers in their 20s and 30s for its spiciness.