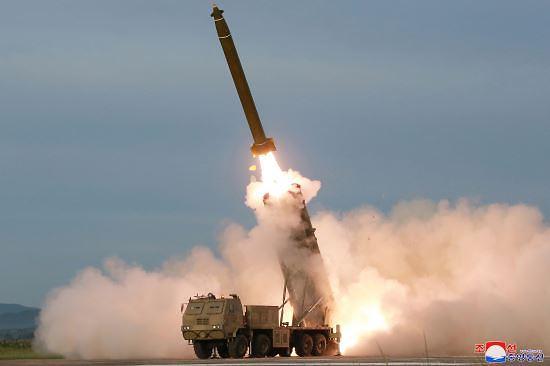 SEOUL -- North Korea fired two short-range projectiles from an inland area north of its capital hours after a senior foreign ministry official announced Pyongyang's willingness to resume dialogue this month and urged Washington to come up with a new acceptable proposal for progress in stalled denuclearization talks.

The projectiles, launched eastward from an area in Kaechon, South Pyongan province, flew up to 330 kilometers, the South's Joint Chiefs of Staff (JCS) said, adding the first one was fired at 6:53 a.m. (2153 GMT) on Tuesday and the second one at 7:12 a.m. Military officials give no further information.

Trump "Well, I saw a statement was just put out having to do with North Korea, and that'll be interesting," Trump said. "We'll see what happens, but I always say having meetings is a good thing, not a bad thing."

Pyongyang is willing to resume denuclearization talks with Washington, Choe said, adding U.S. negotiators would have enough time to find a new "calculation method" as demanded by North Korean leader Kim Jong-un in his speech at the North's rubber-stamp parliament in April. At the time, Kim demanded Washington come up with a "fair" and "mutually acceptable" deal by the end of this year.

"We have willingness to sit with the U.S. side for comprehensive discussions of the issues we have so far taken up at the time and place to be agreed late in September," Choe said. "I believe that the U.S. side will come out with a proposal geared to the interests of the DPRK (North Korea) and the U.S. and based on the calculation method acceptable to us."

Choe, a key figure in denuclearization talks, warned that talks would collapse "If the U.S. side fingers again the worn-out scenario which has nothing to do with the new calculation method."

U.S. President Donald Trump welcomed North Korea's sudden peace overture as "good thing." "Well, I saw a statement was just put out having to do with North Korea, and that'll be interesting," Trump said. "We'll see what happens, but I always say having meetings is a good thing, not a bad thing."

After Kim and Trump failed to reach agreement in their second summit in Vietnam, the U.S. president said that he wanted a "big deal" under which North Korea would dismantle all of its nuclear arsenal and related facilities in exchange for the removal of sanctions.

Showing fatigue at a prolonged deadlock in denuclearization negotiations, Kim has threatened to take a different path unless Washington changes its stance. In return for denuclearization, Kim wants Washington's concessions such as a security guarantee or a non-aggression accord and multilateral negotiations to replace the truce agreement, which ended the 1950-53 Korean War, with a permanent peace treaty.