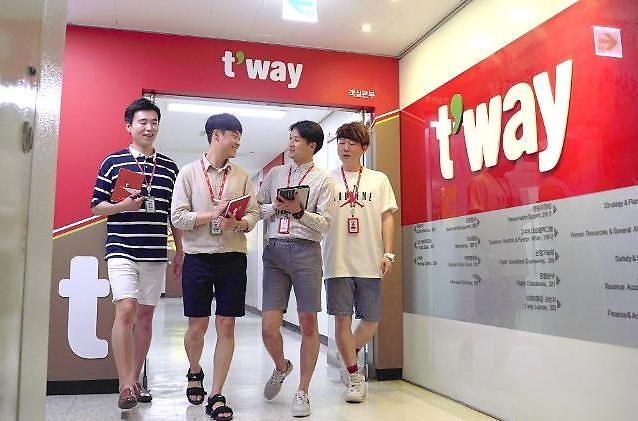 "The first is safety, the second is the corporate culture that harmonizes and cares for comfortable services like a safe family," reads a message published on T'way's website that underlines the corporate philosophy of CEO Jeong Hong-geun who believes that creative ideas can emerge from a culture that respects individual personality and tastes of employees.

Jeong has tried to break industry norms to create an employee-friendly workplace that contributed to the rapid growth of T'way Air, which was established in 2010 with two Boeing 737-800s and became the country's third-largest budget carrier with a 2,000-member workforce in 2018.

T'way has introduced a series of "industry-first" services. It is South Korea's first budget carrier to run its own duty-free shop in the air and hire flight attendants.

In May last year, T'way allowed its cabin crew to freely choose their hairstyles for the first time in South Korea's aviation industry where airlines maintain strict guidelines, with female flight attendants required to either tie their hair back or wear their hair in a bob. T'way's flight attendants were allowed to wear six types of uniforms.

In April this year, the company implemented the policy of staggered office hours, allowing employees to pursue self-development and enjoy hobbies according to their individual living patterns. Those with children can spend more time on childcare efficiently.

"The establishment of a horizontal and flexible corporate culture will improve the satisfaction of employees with their work, which will eventually lead to the best customer service," said a T'way official.

T'way is not the only airline to seek unconventionality. In 2018, Jeju Air allowed flight attendants to wear glasses and decorate their fingernails with multi-colored nail art paintings.

Although many airline companies allow their cabin crew to wear glasses, Korean Air and Asiana implicitly prohibit them and allow only contact lenses. Wearing nail arts is considered an extravagance as the two flag carriers require their crew to maintain tidy uniformed appearances and wear manicures of single low profile colors.