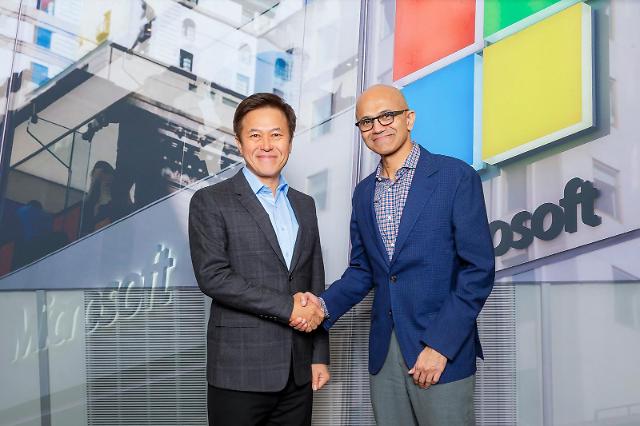 SK Telecom (SKT) said in a statement Monday that under a memorandum of understanding, SKT's 5G and ICT technologies would be combined with Microsoft's cloud and AI technologies to come up with new innovative business models and services that the South Korean mobile carrier hopes to become a game changer in the Fourth Industrial Revolution.

"Cooperation with global powerhouses such as Microsoft is essential to lead the 5G market, which is undergoing a fierce competition," SKT CEO Park Jung-ho was quoted as saying. Jason Zander, executive vice president of Microsoft's Azure, said that through the strategic partnership, Microsoft would play an important role in accelerating digital transformation in the telecom industry.

As an extension of the February partnership, SKT said the two companies would expand Metatron's business area to cover smart factories, which are basically networks of machines with IoT communication capabilities, and need big data analytics management solutions for smooth operation.

While SKT focuses on connecting its AI assistant platform with other IoT devices hooked onto a home network, Microsoft has integrated Cortana into Windows-based vehicle infotainment systems and other services such as cloud computing and "Skype", an online phone service operated by Microsoft.

SKT and Microsoft agreed to create new business items in the media and entertainment sector. SKT will share know-how related to the operation of its 5G network and media businesses while Microsoft provides know-how on its cloud computing solution and other technologies.

At home, SKT has expanded its media and entertainment business to compete with Netflix, an American over-the-top (OTT) service which is popular in South Korea with about 1.5 million subscribed users.