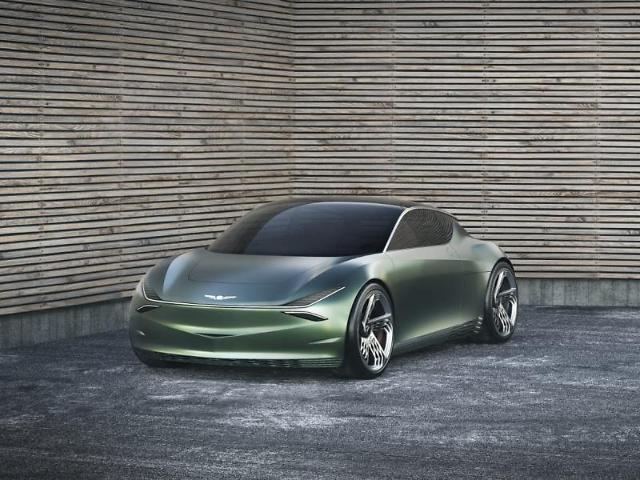 SEOUL -- An electric concept car unveiled by Hyundai Motor's luxury brand, Genesis, before its public debut at this week's New York International Auto Show, represents collaboration among design studios in Germany, the United States and South Korea, who have teamed up for a "highly maneuverable and exhilarating" city car.

The so-called Mint Concept, shown at Hudson Yards, is an electric city car featuring organic design and innovative interior user experience, Genesis said in a statement, adding its battery-electric powertrain is capable of an estimated 200 miles per full charge.

The lightweight runabout reimagines the iconic shape of the city car, tailored to the needs of modern lifestyle. "As a brand, Genesis embraces progressive design values," said Genesis Brand's global head Manfred Fitzgerald. "Mint belongs in the city, and we are proud to introduce our evolution of the ideal city car in New York."

"The Mint Concept disconnects the physical dimensions of the vehicle from its positioning as a premium product, calquing the city car of the past to today," said Luc Donckerwolke, chief design officer of the Hyundai auto group. "The Mint Concept is a designer's Occam's razor that challenged us to visualize a scaled-down interpretation of our signature aesthetic."

Donckerwolke said it is a new urban icon that marries classic proportions with forward-looking, minimalist design. "The Mint Concept instantly finds purpose and meaning in the city, just as so many people who call the world’s most densely populated metropolises home."

The so-called Crest Grille appears as a closed sculptural element with a slight opening for the reduced cooling requirements of the battery pack and the signature Parabolic Line wraps around the body, with a sweeping uptick toward the concave rear, Genesis said.

The G-Matrix pattern serves a functional purpose on the lower half of the vehicle, used for efficient cooling and airflow circulation around the battery floor, it said.

Like a carefully furnished city dwelling constrained by space requirements, Mint has a cozy space through the use of lightweight textiles, cognac leather, and mullion-free windows. "The interior styling of the Mint Concept takes influence from the Korean tradition of embracing the empty space, as well as modern European furniture design," Donckerwolke said.