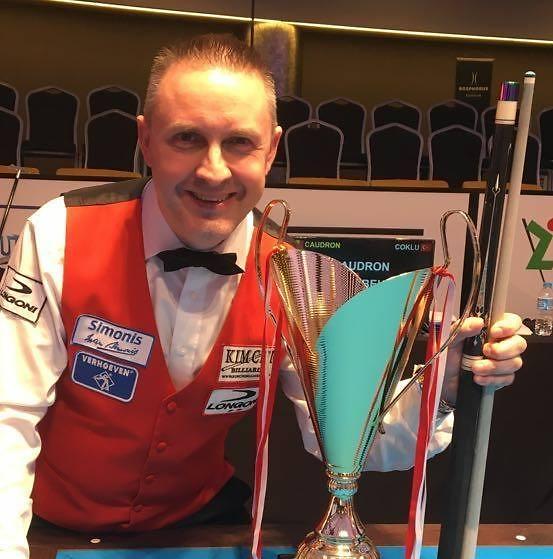 SEOUL -- Frederic Caudron, a Belgian three-cushion billiards player who has won many national and international titles, will be pitted against a South Korean star player this week in a friendly match to promote the creation of a professional 3-cushion league that has caused friction with domestic and international governing bodies.

The match between Caudron, 51, and Kang Dong-koong will be held on Saturday at the Lotte World Mall Atrium Square in southern Seoul, followed by fan signing and other events sponsored by the Professional Billiards Association (PBA), which plans to go into the first season in June.

"I think the PBA pro tour will provide a good opportunity and a better life for billiard players," Caudron told reporters Tuesday when he arrived in an airport west of Seoul with three other European players -- Javier Palazon of Spain, Jean-Paul De Bruijn and Glenn Hofman of the Netherlands.

They are the first group of foreign players who joined the PBA league, defying warnings from the Union Mondiale de Billard (UMB), which organizes 3-cushion world championships and World Cup series.

UMB regards PBA as a divisionist body which poses a threat to its exclusive hold on the governance of the sport. "We will not hesitate to suspend players for extended periods if they participate in these unauthorized events,'' UMB President Farouk Barki said earlier. The Korea Billiards Federation (KBF) with about 1,000 registered players has sided with the global body, warning of a three-year ban.

Each year, about 80 percent of KBF players participate in dozens of small carom competitions or local tournaments. Many of them have different jobs because they cannot live off billiards. European players are also forced to play multiple leagues in Belgium, the Netherlands, Germany, France, Spain, Portugal and Austria.

PBA hopes to change the trend, but it has yet to overcome jealousy and doubts. Caudron's campaign to draw European players into the professional league in South Korea has been largely unsuccessful with many succumbing to UMB warnings. European leagues have been dominated by veteran players like Caudron, with young players having no realistic chance of catching up with the established elite.

At home, more than 200 KBF players have joined the new tour, but many big names still watch and see how the situation unravels. The list of major league PBA players would be disclosed in mid-May.

Billiards is a huge market in South Korea, which has more than 2,000 billiard halls. Kimchi, a billiard equipment maker, has partnered with Bravo&New, a sports marketing and management company to launch the professional league. They plan to sponsor up to eight tournaments by February next year, although the exact amount of prize money was not fixed.

"I am very happy to lead the pro billiards tour in South Korea, which spearheads the global billiard industry and market," said PBA commissioner Kim Young-soo, a former sports minister who served as the chief organizer of the 2014 Asian Games in the western port city of Incheon. He said the tour's successful debut would help South Korea double the value of its domestic billiard market to four trillion won ($3.5 billion).

Kim's is not too optimistic. A new billiards boom is taking shape in South Korea partly thanks to the growing popularity of 3-cushion players, the introduction of new equipment, an exclusive broadcasting station and a smoking ban that went into effect in December 2017.