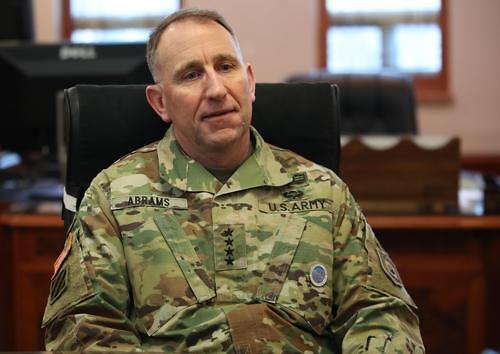 "You can sleep well tonight knowing that the combined force is ready," Abrams said during an exclusive interview with Yonhap News Agency on Wednesday, making his first public assessment of the new Dong Maeng exercise that closed the previous day.

"Every senior leader in the ROK-U.S. military alliance is absolutely committed to ensure that our force is ready for any requirements to deal with crisis or any potential hostilities," Abrams said at his Seoul office. ROK stands for South Korea's official name, the Republic of Korea.

"That is our solemn obligation. That is our responsibility and we take it very seriously, and we are doing all things necessary to ensure that we have a ready force," he added.'

The allies introduced the exercise, seen as a truncated version of Key Resolve, to back diplomacy for lasting peace on the peninsula. But conservatives here voiced concerns that the smaller-scale exercise could harm military readiness when Pyongyang has yet to take any substantive steps toward denuclearization.

The hard-bitten commander, who has led the USFK, U.N. Command (UNC) and South Korea-U.S. Combined Forces Command (CFC) since November, stressed that his troops "train at every level to develop mastery-level skills."

"I have been doing this for 37 years ... I consider myself an expert (at a) mastery level of operational art in training and readiness," he said. "If I tell you that what we are doing is meeting the requirements for us to have a trained and ready force, you need to take that to the bank."

Abrams pointed out that in the past, Seoul and Washington publicized their maneuvers as part of their messaging to the region that "the alliance is strong and acts as a deterrent," but that stance has changed.

"We've got a great diplomacy ongoing. We've got a significant reduction of tension on the peninsula compared to 2017. So we have to adjust how we still meet our responsibilities to maintain a trained and ready force and at the same time create space for diplomacy to work," he added.'

Commenting on his recent controversial congressional remarks seen as signaling the possibility of the U.S. troop withdrawal -- or drawdown -- in the event that a peace treaty is signed with Pyongyang, Abrams said that it was "completely taken out of context."

"That one sentence did not take into context the entire interchange I had with that particular senator," he said. "Our troop presence is an alliance decision that has nothing to do with any potential future peace treaty."

In response to a senator's question on February 12, he said the 28,500-strong USFK will stay on the peninsula "until there is a peace treaty, because we still remain in a state of armistice, a cessation of hostilities." The remarks added to concerns about the USFK's future in the event of the North's denuclearization and the establishment of a peace arrangement to replace the armistice agreement that halted the 1950-53 Korean War.
(Yonhap)