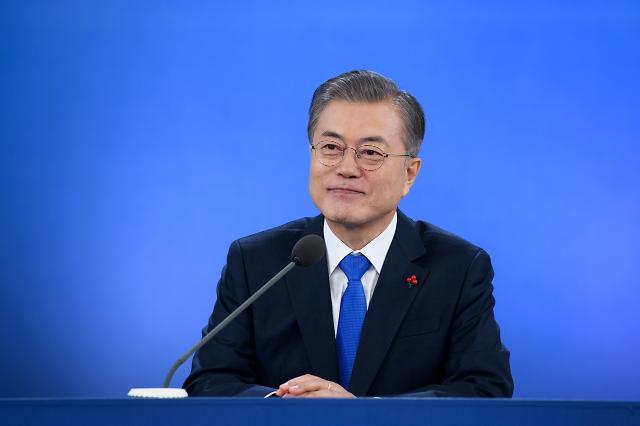 [Courtesy of the presidential Blue House]


SEOUL -- Regardless of its format, South Korea will welcome a declaration just between North Korea and the United States on ending the status of war on the Korean peninsula as a catalyst to complete denuclearization, the South's presidential office said.

Ahead of a summit in Vietnam between U.S. President Donald Trump and North Korean leader Kim Jong-un, South Korea drew a clear line between a formal peace treaty and a declaration on the end of war. In return for denuclearization, Kim wants Washington's concessions such as a security guarantee or a non-aggression accord.

"There is a possibility that there will be an agreement between North Korea and the United States," South Korean presidential spokesman Kim Ui-gyeom told reporters on Monday.

"I think a declaration just between North Korea and the United States is enough," the spokesman said, adding that there can be various types of a declaration. "There may be many ways, but our government welcomes any form of declaration."

At an inter-Korean summit in April last year, the two Koreas agreed to work on ending the status of war, stop all hostile acts against each other and turn the demilitarized zone (DMZ) into a genuine peace zone. To remove the risk of war on the Korean peninsula, they stopped all artillery drills and field maneuvers by setting up maritime, air and ground buffer zones in front-line areas.

The North's leader wants active multilateral negotiations to replace the truce agreement, which ended the 1950-53 Korean War, with a permanent peace treaty. South Korean President Moon Jae-in has suggested that at the last stage of denuclearization, a permanent peace regime should be signed between countries involved in the war.

"It is our government's position that a peace treaty should be multilateral," the because such a multilateral treaty must contain complex clauses, the spokesman said. "I think it is premature to discuss or prepare for a peace treaty now."