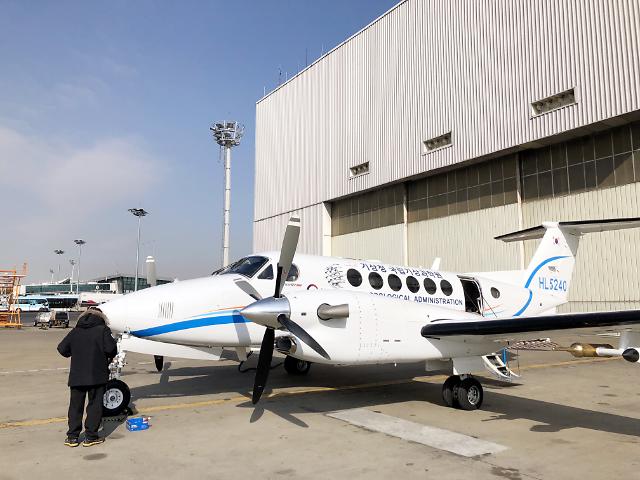 
SEOUL -- South Korea failed to produce any meaningful results in its first offshore experiment to determine whether artificial rainfall is effective in alleviating air pollution caused by fine dust, which has been a source of prime public concerns and diplomatic disputes in Northeast Asia.

The experiment was carried out on January 25 in the Yellow Sea about 110 kilometers (68 miles) northwest of the southwestern town of Yeonggwang with a plane spraying silver iodide, a chemical used to create rain clouds. President Moon Jae-in has urged government officials to handle fine dust as a national policy objective like a natural disaster and develop technologies such as artificial rainfall.

The Korea Meteorological Administration (KMA) said Monday that there was no precipitation with just a misty rain phenomenon spotted for a few minutes. The size of precipitation particles had increased, but no rain or snow was observed in a weather vessel or ground observation equipment, it said.

The weather agency and the environment ministry would conduct 14 more tests this year to achieve the goal of realizing artificial rainfall in 2024.

There are still doubts over the efficacy of artificial rain as a fundamental way of fighting air pollution. A research center run by Kangwon National University's department of biological environment found that at least five millimeters of rain per hour should be used to reduce the concentration of fine dust.

Fine dust refers to particles smaller than 10 micrometers and causes various respiratory problems. China has been cited in South Korea as the main culprit for aggravating particulate pollution on the Korean peninsula, but experts also point to power plants and vehicles using fossil fuel. Seoul and Beijing have discussed practical steps to bring down levels of fine dust particles and harmful volatile organic compounds (VOCs).