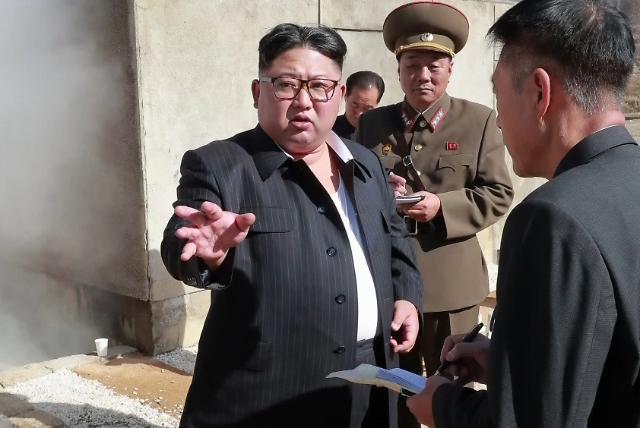 
SEOUL -- Under the guidance of leader Kim Jong-un, North Korea claimed to have successfully tested a new "ultramodern" tactical weapon at a defense research institute sanctioned by the United States for leading the development of ballistic missiles.

Kim was "so excited to say that another great work was done" during his guidance on the testing ground of the Academy of Defence Science, the North's official Korean Central News Agency (KCNA) said in an English dispatch on Friday.

With the development of a new tactical weapon, North Korea made a "decisive turn" in bolstering its military power, Kim was quoted as saying. It is "just like a posthumous weapon," he said, adding his late father, Kim Jong-il, had paid "special" attention to its development before his death in December 2011.

Details such as date and the type of a new tactical weapon were withheld, but the defense research institute in Pyongyang has been involved in a missile program and the development of naval vessels and weapons in the Sinpo base, home to a submarine-launched ballistic missile program and an SLBM submarine. The institute has been sanctioned by the United States.

At an inter-Korean summit in September, Kim said he would permanently dismantle facilities for long-range ballistic missile launches and engine testing in the Sohae space center in the presence of international inspectors. Sohae has played an important role in the development of intercontinental ballistic missiles (ICBMs).

Sanctions imposed by the United States and its allies have focused on ICBMs and other strategic weapons.

The test of North Korea's new tactical weapon followed a report by Beyond Parallel, a group at the Center for Strategic and International Studies (CSIS), which said it has located 13 out of an estimated 20 missile operating bases undeclared by the regime.

The missile operating bases would presumably have to be subject to "declaration, verification, and dismantlement in any final and fully verifiable denuclearization deal," the American think-tank group said, highlighting a missile base in Sakkanmol in North Hwanghae Province.

South Korea's presidential office cautioned against any rash disclosures that could cause misunderstanding or hamper dialogue between Washington and Pyongyang. Sakkanmol is a short-range missile base, it said, adding there is no accord to report such facilities.