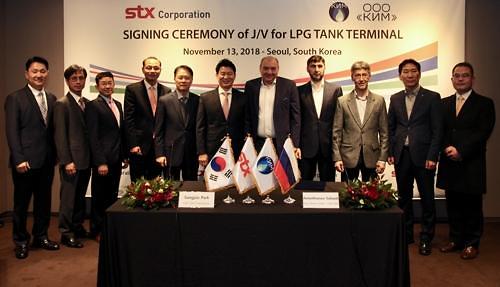 STX said in a statement Thursday that the company signed a deal this week in Seoul to invest $6 million in KIM, a Russian LPG tank terminal operator which pursues gas storage and shipment services for Russian and Chinese customers.

KIM plans to build an LPG tank terminal that would serve as an intermediate logistics base in Khasan near the tripoint on the Tumen River where the borders of Russia, China and North Korea converge. STX predicts KIM can sell about 600,000 tons of LPG in the next three years.

Demand for Russian natural gas in the region is growing, but there are no proper facilities. Khasan is a strategically vital spot to set up a tank terminal. An inter-Korean thaw rekindled the idea of building a gas pipeline through cooperation between the two Koreas and Russia.